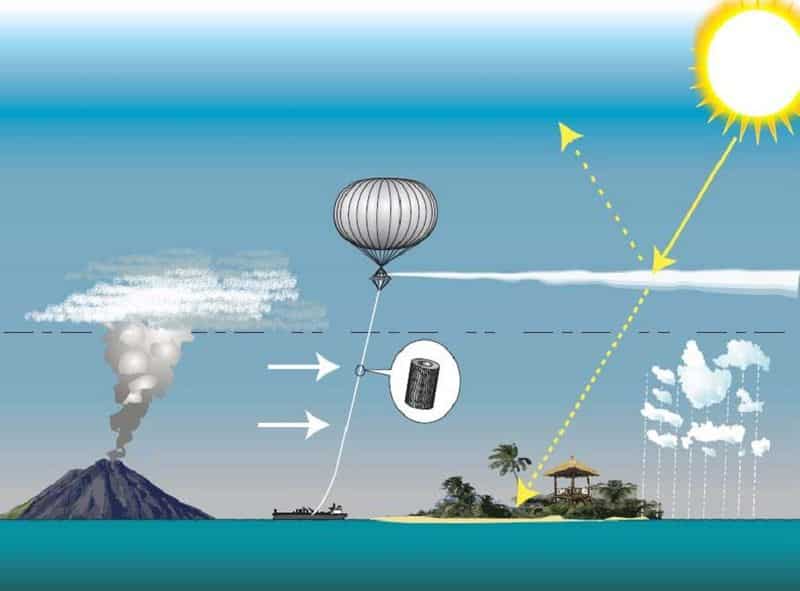 Geoengineering technique: the idea of simulating natural processes that release small particles into the stratosphere, which then reflect a few percent of incoming solar radiation, with the effect of cooling the Earth with relative speed.

With a miniature experiment to try to cool the planet by blocking sunlight planned in Arizona within a year, international rules to govern “geoengineering” efforts must be put in place quickly, a governance advocate said.

An open, inclusive discussion on how the world will research and govern solar geoengineering is “urgently” needed in the face of such plans, said Janos Pasztor, head of the Carnegie Climate Geoengineering Governance Initiative.

“We could be in danger of events overtaking society’s capacity to respond prudently and effectively,” he said on Friday before a speech at Arizona State University.

World leaders agreed in the 2015 Paris deal on climate change to hold any rise in average global temperature to “well below” 2 degrees Celsius.

But with a shift away from fossil fuels happening slower than is needed, and the world on track to more than 3 degrees Celsius of warming, some scientists now say engineering efforts to cut the risks of excess warming may be needed.

Those might range from efforts to dump iron into the ocean to help carbon-absorbing plankton grow more quickly to spraying saltwater into sea clouds to make them reflect more sunlight.

Researchers at Harvard University hope this year to use a high-altitude balloon to release about a kilogram (2.2 pounds) of sun-dimming mineral dust into the stratosphere above the U.S. state of Arizona.

The experiment would mimic, on a tiny scale, how large volcanic eruptions cool the earth by blasting ash into the atmosphere.

The technique does not actually remove carbon dioxide from the atmosphere, however, and so would have little effect on climate change concerns such as increasing acidification of the world’s oceans.

A U.N. panel of climate experts, in a leaked draft of a report about global warming due out in October, said such solar geoengineering, at larger scale may be “economically, socially and institutionally infeasible.”

Developing world scholars from a range of climate-vulnerable countries noted in the journal Nature last week that “the technique is controversial, and rightly so. It is too early to know what its effects would be: it could be very helpful or very harmful”.

Simon Nicholson, co-executive director of the Forum for Climate Engineering Assessment, based in Washington, said while early geoengineering experiments like Harvard’s present no physical risk, they could lay the groundwork for eventual large-scale deployment of the technology.

“The urgency comes from the desire to get out in front of something that might be important a few years from now,” Nicholson told the Thomson Reuters Foundation.

Large-scale use of such sun-dimming technology could have a range of little-understood side effects, scientists warn, including potentially shifting Asian monsoons that are crucial to farming that feeds billions.

Nicholson said the planned Arizona experiment has met all legal requirements, and the researchers have pushed to include an environmental impact assessment even though it is not formally required by law.

“They could do this experiment tomorrow. Under Harvard research guidelines and U.S. law there is nothing stopping them. All the boxes are checked,” he said.

But “they’re going slow because they realise that, as the first labeled solar geoengineering experiment, they have an obligation to get it right”, he said.

Pasztor, a former United Nations assistant secretary-general on climate change, said a growing number of governments “recognise some parts of geoengineering are coming … and we need to seriously deal with it”.

“It’s on their radar screen,” he said.

German police try to work out motive for Muenster attack