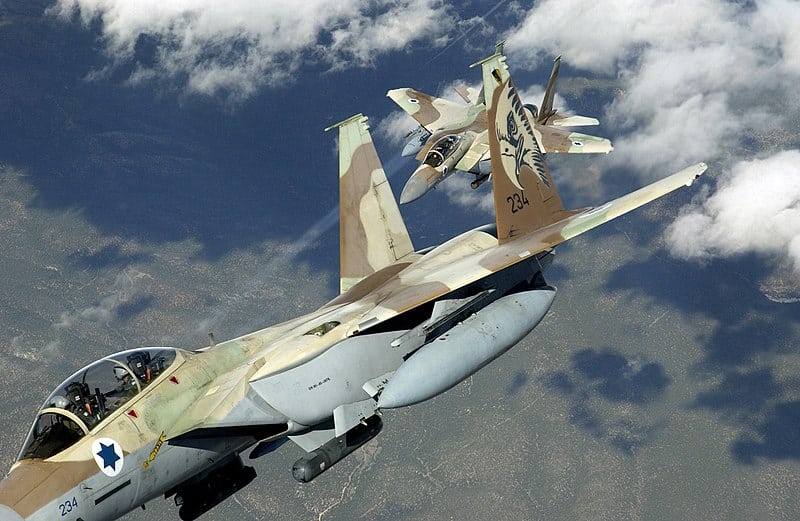 The Russian military, whose support for Assad turned the war in his favour, said two Israeli F-15 war planes carried out the strike

Syria and its main ally Russia blamed Israel for carrying out an attack on a Syrian air base near Homs on Monday which followed reports of a poison gas attack by President Bashar al-Assad’s forces on a rebel-held town.

Israel, which has struck Syrian army locations many times in the course of its neighbour’s seven-year-old civil war, has neither confirmed nor denied mounting the raid.

But Israeli officials said the Tiyas, or T-4, air base was being used by troops from Iran and that Israel would not accept such a presence in Syria by its arch foe.

The strike took place after a suspected chemical weapons attack on the rebel-held town of Douma which, according to one Syrian aid organisation, killed at least 60 people.

U.S. President Donald Trump warned of a “big price to pay” after the initial reports of the poison gas attack, although the Syrian government and its main ally Russia have denied involvement.

The Organisation for the Prohibition of Chemical Weapons international watchdog said it had opened an investigation to determine what exactly had happened in Douma.

U.S. Defence Secretary Jim Mattis on Monday raised the possibility of military action against Syria if it was proved to have carried out a chemical weapons attack.

British Prime Minister Theresa May called it “reprehensible” and said if the Assad government was found to be responsible, it would be held to account.

Russian Foreign Minister Sergei Lavrov said such allegations were false and a provocation. Lavrov said the strike on the T-4 base was a dangerous development.

The latest incidents in Douma and Tiyas demonstrated the complex and volatile nature of the Syria war, which started in March 2011 as an anti-Assad uprising and now involves a number of countries and a myriad of insurgent groups.

The Syrian Observatory for Human Rights, a British-based monitor, said at least 14 people were killed in Monday’s air strike on the T-4 base, including foreign fighters – a reference to Iranian-backed Shi’ite militia members, mostly from Iraq, Lebanon and Iran fighting alongside the Syrian army.

Syrian state TV initially said the United States was suspected of carrying out the attack on T-4. Washington denied this, and France, which in February had said it would strike in the event of a chemical weapons attack on civilians by Syrian government forces, said its forces were not involved.

Syrian state news agency SANA, citing a military source, carried a similar report. “The Israeli aggression on the T4 airport was carried out with F-15 planes that fired several missiles from above Lebanese land,” it said.

Israel has accused Damascus of allowing Iran to set up a complex at the T-4 base to supply arms to its ally, Lebanon’s Hezbollah, and in the past its forces have hit convoys and bases of Iranian-backed militias that fight alongside Assad’s troops.

Defence analysts say a number of Russian troops are also based there and jets fly regular sorties from T-4.

“In this context we are taking action with all means, over time.”

FOAM AT THE MOUTH

As international officials worked to try to confirm the suspected chemical attack on Douma, a Syria medical relief group said at least 60 people had been killed there and more than 1,000 injured in several sites.

“The numbers keep rising as relief workers struggle to gain access to the subterranean areas where gas has entered and hundreds of families had sought refuge,” said the Union of Medical Care Organizations (UOSSM).

The Syrian opposition blamed the suspected attack on government forces, who launched an air and ground assault on Douma, the last rebel-held town in the eastern Ghouta district, on Friday.

One video shared by activists showed bodies of about a dozen children, women and men, some with foam at the mouth. Reuters could not independently verify the reports.

The United States fired missiles on a Syrian air base a year ago in response to the killing of dozens of civilians in a sarin gas attack in an opposition-held town in northwest Syria, blamed on Assad.

U.S. government sources said Washington’s assessment of Saturday’s attack was that chemical weapons were used. The European Union also said evidence pointed to the use of chemical weapons by Assad’s forces.

The United Nations Security Council will meet on Monday following rival requests by Russia and the United States.

U.N. war crimes investigators had previously documented 33 chemical attacks in Syria, attributing 27 to the Assad government, which has repeatedly denied using the weapons.

UOSSM said doctors could not determine the origin of Saturday’s suspected chemical attack. Dr. Muhammad, a doctor in Ghouta, said patients were coughing blood, a symptom not seen in previous chemical attacks.

Despite the potential reprisals, the attack appears to have brought Assad closer to victory in the military campaign for eastern Ghouta launched by his Russian-backed army in February.

The rebel group Jaish al-Islam has given way to a Syrian government demand that it accept safe passage out to rebel-held areas at the Turkish border.

“This president has the chance to do exactly the opposite of (former U.S. President Barack) Obama – send a strong signal that there’s a new sheriff in town and America’s back,” Graham told Fox News in an interview.