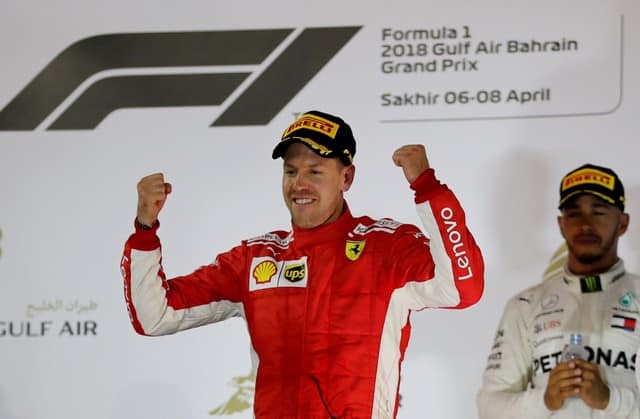 Ferrari’s Sebastian Vettel held on by the skin of his teeth to win a tense Bahrain Formula One Grand Prix in his 200th race start on Sunday.

His tyres fading, the championship leader took the chequered flag only 0.6 seconds clear of Mercedes’ Valtteri Bottas who piled the pressure on in the final 10 laps.

Vettel now leads Hamilton by 17 points after two of the 21 races.

The win under the floodlights was the 49th of Vettel’s grand prix career and an unprecedented fourth at the Sakhir desert circuit.

It also made the 30-year-old, who won in Melbourne two weeks ago, the first Ferrari driver since compatriot Michael Schumacher in 2004 to win the first two races of a season.

“These tyres were done, done, in the last 10 laps,” a jubilant Vettel told his team over the radio after crossing the line.

He had earlier told his team that everything was under control but that, he recognised later with a smile, was not at all the reality.

“With Bottas’ pace I thought he would catch me. I tried to keep it as clean as possible. Our plan worked but just, Bottas had a bit of a sniff but ran out of laps,” said the four times champion.

Vettel had led from pole position, with Bottas slotting into second place at the start from third on the grid, but ended up having to battle the Mercedes pair alone.

Mercedes’ decision to go for the more durable medium tyres and a one-stop strategy, compared to Ferrari’s move to bolt on softer rubber in anticipation of a two-stop race, brought the evening alive.

Drama in the pits, when team mate Kimi Raikkonen was brought in to test the strategy, decided Ferrari in favour of keeping Vettel out.

Raikkonen was given the green light to exit before his left rear tyre had been changed, with the Finn’s car then hitting a mechanic who was taken to hospital with a suspected broken leg while the driver retired.

“I started ninth so third is not bad at all,” said the Briton. “It’s damage limitation.”

Both of the Red Bull drivers Max Verstappen and Daniel Ricciardo retired within the first five laps.

Verstappen suffered a rear-left puncture after making contact with Hamilton as he tried to pass the Briton, and limped back to the pits.

“Going into the corner I was ahead and then of course you always try to squeeze each other a bit,” said the 20-year-old.

“But I think there was still enough space on the left. He drove into my left rear and gave me a puncture and also destroyed the diff.”

Danish driver Kevin Magnussen was fifth in the Haas ahead of Nico Hulkenberg for Renault.

Fernando Alonso and Stoffel Vandoorne gave McLaren, now with Renault engines, a second successive double points finish in seventh and eighth respectively to lift the team to third overall. But they finished a lap down.

There were also celebrations at Sauber, with Sweden’s Marcus Ericsson finishing ninth for his first points since 2015 and the Swiss team’s first of the season, but gloom at Williams whose drivers finished last.

The former champions are now the only team yet to score points this season after Force India’s Esteban Ocon secured 10th place.

Another three medals for Cyprus at the GC2018 Games