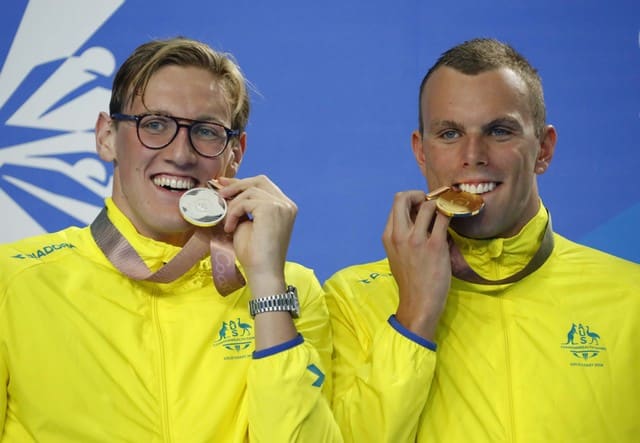 Bronte Campbell and Kyle Chalmers were roared on by a fervent home crowd on Tuesday to ensure a totally dominant Australia team finished the Commonwealth Games swimming programme with victory in the 4×100 metres medley relays.

Campbell and Chalmers both had to chase down their respective rivals in the final freestyle legs of the relays, with the races an accurate microcosm of the entire swimming competition at the Gold Coast Aquatics Centre.

While pushed in many of the events on the programme, particularly by a resurgent Canadian team led by the impressive teenager Taylor Ruck, ultimately it was ‘Advance Australia Fair’ that rang out around the open-air venue.

They won eight of the nine medals on the final day with Ariarne Titmus, Emily Seebohm, Mitch Larkin and Jack McLoughlin all recording victories in their individual races, as the hosts diminished the memories of a poor world championships last year.

Australia finished eighth on the table in Budapest with 10 medals and only one gold, to Seebohm in the 200m backstroke, to produce their worst return at the world championships since 1991.

That had left fans, used to the country being a swimming powerhouse, wringing their collective hands and the team were under pressure to ensure it did not happen again in their own backyard. In the end, they need not have worried.

The hosts won 73 medals, 28 of them gold, produced five clean sweeps in the non para-swimming events — the men’s 50m and 200m backstroke, women’s 800m freestyle and women’s 50m and 100m butterfly — and set the only world record in the women’s 4x100m freestyle relay.

“Our aim for this campaign was to make Australia proud and show Australia what we’re made of and I think we succeeded in that.”

That success continued early on the final day when Titmus won the women’s 400m freestyle to go with Monday’s 800m title.

Seebohm then prevented Canada’s Kylie Masse sweeping the backstroke gold medals when she clinched the 50m title, just holding off the 22-year-old and Glasgow champion Georgia Davies of Wales.

Larkin was arguably Australia’s best male performer of the competition as he swept all three backstroke titles then proved his versatility when he won the 200m individual medley.

McLoughlin then added the 1500m freestyle title to his 400m silver he won on the first day, while Lakeisha Patterson won the women’s S8 50m freestyle and Brenden Hall the men’s S9 100m backstroke para-swimming events.

The only gold medal not won by the hosts on Tuesday was by England’s Ben Proud, who redeemed himself from being disqualified in the heats of the 50m butterfly, with victory in the 50m freestyle.

It was his country’s final gold of the meeting and they finished a distant second to the Australians, with nine golds and 24 medals overall.

However, with Scotland winning nine medals and Wales five, the combined British team are likely to be extremely competitive at the European championships in August.

Australia now prepare for the Pan Pacific titles in Japan in August while all of the nations turn their focus to next year’s world championships in South Korea and the 2020 Tokyo Olympics.

But as if they did not need reminding this was Australia’s event, they got it as the men’s relay teams left the pool deck following the medal ceremony with the crowd’s chant of “Aussie! Aussie! Aussie! Oi! Oi! Oi!” ringing in their ears.