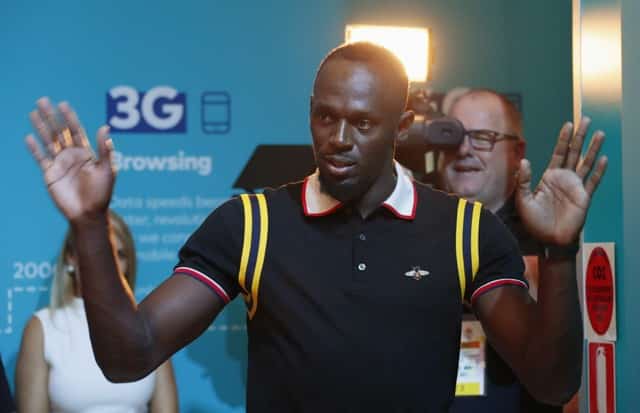 Usain Bolt sometimes still can’t quite believe what he achieved in his career but back at the Commonwealth Games as a spectator on Thursday, the former sprint champion was happy to avoid the perspiration and just act as an inspiration to others.

A relay gold medallist at the 2014 Commonwealths in Glasgow, the Jamaican said he was busier than ever after last year’s retirement and focused, in the sporting arena at least, entirely on his nascent career as a footballer.

The 31-year-old’s jet-set lifestyle left him little time for the post-career blues, Bolt said, but he did still frequently take time to contemplate his extraordinary success.

“I sometimes with my best friend say, ‘Can you believe it, what we’ve done?’ because I’m from the rural area of Jamaica, the country, and I used to play football in the streets,” he told a news conference on the Gold Coast.

“I kicked around bottles, anything I could get my hands on, I’d run around in bare feet, at no point in time did I think I would be at this level.

“So for me it’s just amazing, sometimes I just sit back and be wowed because I’ve done so much.”

The eight-times Olympic and 11-times world champion said one of the most satisfying aspects of his career was having spurred on others by his example.

“All the time I get messages or people see me, not only track athletes or sports people, but just regular people, who say I’ve inspired them to do well, to work hard, to be a doctor or just do better for themselves,” he added.

“For me it’s unbelievable, but I’m just happy to inspire people to be better, it’s just mind-blowing sometimes.”

A packed news conference room at an often near-deserted media centre on the Gold Coast told its own tale of Bolt’s enduring appeal but he said he thought it would only be a matter of time before new talents came along to eclipse him.

“It’s not always going to be like this, but it’s going to take time,” he said.

“I’ve said it to a few athletes, this is your time. The sport definitely needs someone to step up and be that person. It’s a wide open field.

Bolt long ago traded bare feet for state-of-the-art athletics shoes and he said his newest venture, a series of trials with German soccer club Borussia Dortmund, was still in the early stages.

“I’m very serious about playing football, I’m putting in the work, I’m working with Dortmund at the moment,” he added.

“They’re really helping me figure out in which direction I need to be going in, where I need to improve, to be better if I’m really going to do this.

“I’m not linked to Manchester United, hopefully in the future.”

Still very much a fan of the sport which made him a wealthy man, Bolt said he was looking forward to watching the Commonwealth Games 200 metres final, a distance at which he is still world record holder, later on Thursday.

Although he only competed once at the quadrennial gathering of mainly former British colonies, Bolt said there had always been a reason for his absences and he viewed it as a “very important” event.

He was also looking forward to catching up with former training partner Yohan Blake and ribbing him for failing to win the 100m but he had a succinct answer for one reporter who suggested Bolt would be back on the track at the Tokyo Olympics.

“You are very wrong,” he chuckled.