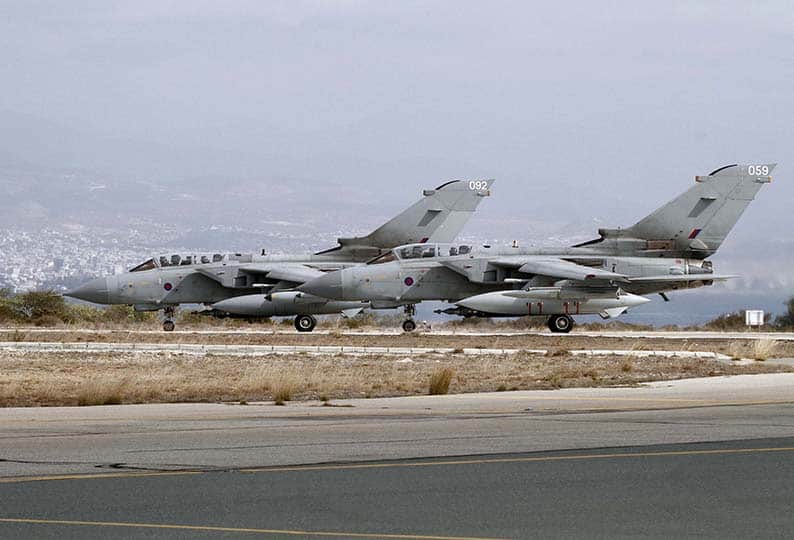 The Sovereign Base Areas (SBA) on Thursday requested from Cypriot authorities to reserve airspace within Nicosia’s Flight Information Region (FIR), according to the head of the civil aviation department.

The request was being considered, Charis Antoniades told the state broadcaster.

“The request was for reserving a section of airspace outside Akrotiri for preparatory reasons. They do not concern new areas, these areas have been requested before, and we get these requests all the time.”

The request in question was for a duration of a few weeks, he added.

The official’s statement came amid reports in the British press of heightened activity at RAF Akrotiri airbase, with war jets said to be prepping for a possible strike on Syria.

Meanwhile in London British prime minister Theresa May was convening her ‘war cabinet’ to discuss the latest crisis in Syria.

The Nicosia flight information region named in the Eurocontrol statement covered Cyprus and surrounding waters, according to a map on the agency’s website.

Antoniades confirmed that in the wake of the warning commercial airliners were changing flight paths, resulting in increased traffic to the south and west of the island.

For example, flights to and from Tel Aviv were being rerouted via Paphos, instead of the normal flight path off Apostolos Andreas to the east of the island.

Traffic to the east of the island was reduced to a minimum, he said.

But he stressed that no flights to Cyprus were being cancelled.

Middle East carrier Kuwait Airways said on Thursday it had stopped all flights to Beirut after a warning about flying close to Lebanese airspace.The security warning came from Cyprus authorities, the Middle East airline said on Twitter early Thursday morning.

Foreign minister Nicos Christodoulides reiterated that Cyprus was “in no way involved in what is happening, or what may happen, in Syria.”

He added: “The Sovereign Base Areas have been in Cyprus since 1960. There is absolutely no cause for concern. We must stress that Cyprus remains one of the safest places in Europe.”

US President Donald Trump and Western allies are discussing possible military action to punish Syria’s President Bashar Assad for an alleged poison gas attack on Saturday on a ‘rebel’-held town that had long held out against government forces.

The last remaining pocket in Douma had been held by the Jaish al-Islam faction. The group desires the destruction of nations and the establishment of an Islamic caliphate, and it has publicly praised Al Qaeda.

Syria and its ally Russia counter that the chemical attack claims have been concocted by Islamist factions – some of them Western-backed – to lure in the international community.

Back in February, US Secretary of Defence James Mattis admitted that Washington had “no evidence” that the Syrian government had used the banned nerve agent Sarin against its own people.

His assertion contradicted a White House memorandum which had been rapidly produced and declassified to justify an American Tomahawk missile strike against the Shayrat airbase in Syria on April 7, 2017.

Mattis did not qualify his statement time-wise, indicating that neither the 2017 event in Khan Sheikhoun nor the 2013 tragedy in Ghouta could be attributed to the Assad government.