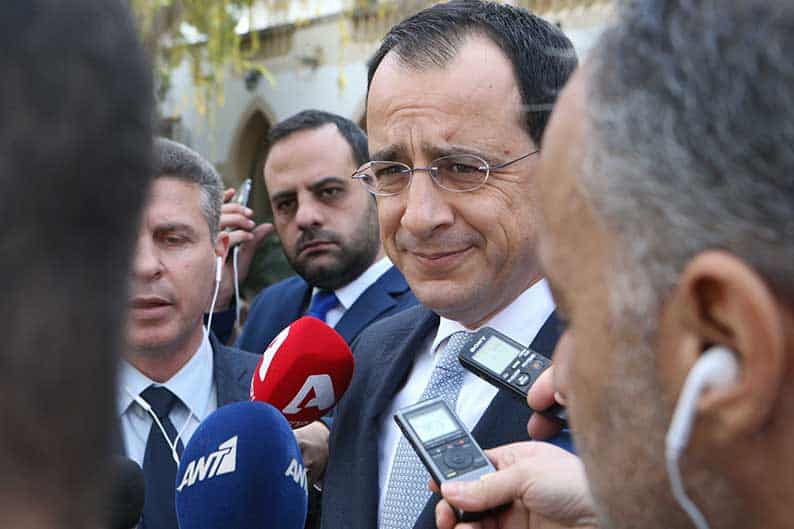 Foreign Minister, Nicos Christodoulides, called on the Turkish Cypriot side to refrain from making any statements prior to the informal dinner of the two leaders next week, as this would limit chances of a positive outcome.

Christodoulides, speaking to state broadcaster CyBC radio, said that the more statements were made prior to the two leaders’ dinner, the lesser the chances of a positive result.

The minister was referring to statements by Turkish Cypriot leader Mustafa Akinci who had warned that if another round of settlement talks was launched, changes must be made and it would not be like the old procedure.

Speaking to the press before departing for Istanbul where he was to deliver a speech at the 21st Eurasian Economic Summit, Akinci said that any new talks would not be a resumption from the point they left off in Switzerland last summer, nor would they take place in the same manner.

“That process ended. Fifty years have passed since that framework was first adopted. It is clear that such open-ended and long processes will not take us anywhere. We shall be assessing the situation, looking to see where there is any intention to build or shape a common future, whether or not we can work on a basic vision and whether or not we can agree on the modalities. We want to understand and at the same time share our own views. This is the framework of the social dinner,” Akinci said.

He added he would meet the leaders of Turkish Cypriot parties on Friday to assess the situation ahead of the meeting with President Nicos Anastasiades. The dinner, which is taking place on Monday evening, will be hosted by Elizabeth Spehar, deputy special adviser to the UN Secretary-General at the chief of mission’s residence in the buffer zone.

Christodoulides said he would not comment on what Akinci said and made a plea for as few statements as possible to avoid sabotaging the dinner before it even took place.

“If we truly want a positive result, a prospect for the resumption of the talks, it would be best to say less publicly,” Christodoulides said.

This, he said, it also the approach of the Greek Cypriot side.

“A plea if I may to the Turkish Cypriot community; the less it is being said, the better the prospects,” he said.

Christodoulides said that Anastasiades would go to the dinner with ‘clear intentions’.

“Our wish is that something specific and positive comes out of that meeting,” he said.

Asked however, on the talks’ prospects if the Turkish Cypriots bring up the matter of a joint committee which will be deciding on the management of natural resources, Christodoulides said: “If such a thing happens, we will understand that there is no wish by the other side for positive results”.

“We wish a positive outcome from this dinner. Public statements do not help,” Christodoulides reiterated.

Later in the day, Dogan news agency (DHA), citing diplomatic sources, reported that Akinci will seek answers to three issues at the dinner; whether Anastasiades insists on the ‘zero troops-zero guarantees’ approach, whether the political equality of Turkish Cypriots would be accepted by the Greek Cypriots, and natural gas exploration.

As to the latter, the source told Dogan that the Turkish Cypriot side would like to know if hydrocarbon exploration will stop until after a settlement solution or if a structure will be set up to include the Turkish Cypriots in the decision making.

The Turkish Cypriot side will not back down on any of these three issues, the source was quoted as saying by Dogan.

Meanwhile, Turkish Deputy Prime Minister responsible for Cypriot Affairs, Recep Akdag, who was in the north on Wednesday for contacts, reiterated Turkey’s position that there cannot be a settlement solution unless the Greek Cypriots accept the Turkish Cypriots as politically equal.

The Greek Cypriot side, Akdag told media in the north, must understand that things will not continue as they are today. He also reiterated that Turkey will not give up its guarantor rights on the island, which, he said, ensure the Turkish Cypriots’ security.