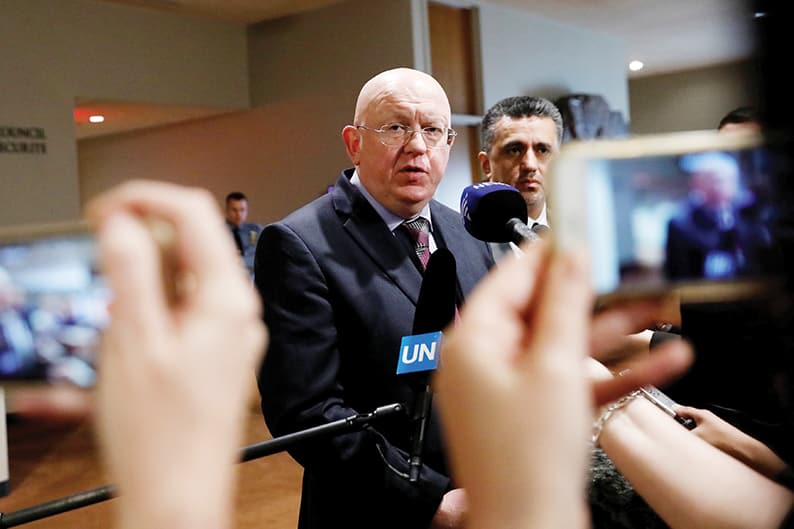 Russia’s U.N. Ambassador Vassily Nebenzia urged the United States and its allies on Thursday to refrain from military action against Syria over a suspected chemical weapons attack and said he “cannot exclude” war between Washington and Moscow.

Speaking after a closed-door U.N. Security Council meeting requested by Bolivia over threats of military action in Syria by U.S. President Donald Trump, Nebenzia said the situation was even more dangerous because Russian troops are in Syria.

“The immediate priority is to avert the danger of war,” he told reporters. “We hope there will be no point of no return.”

When asked if he was referring to a war between the United States and Russia, he said, “We cannot exclude any possibilities, unfortunately, because we saw messages that are coming from Washington. They were very bellicose.”

Trump said he was holding meetings on Thursday on Syria, and expected to make decisions “fairly soon.”

Russia called a meeting of the Security Council for Friday on Syria and has asked for U.N. Secretary-General Antonio Guterres to publicly brief the body.

In a bid to avoid an escalation, Sweden proposed a Security Council resolution on Thursday, seen by Reuters, that would ask Guterres to send a high-level disarmament team to Syria to address “all outstanding issues on the use of chemical weapons once and for all.”

Some U.N. diplomats said there was little interest among the council’s 15 member countries to pursue the proposal.

Nebenzia thanked Sweden for its efforts, but added, “Frankly in the circumstances we find ourselves now, this is not an immediate priority.”

The council failed on Tuesday to approve three draft resolutions on chemical weapons attacks inSyria. Russia vetoed a U.S. text, while two Russian-drafted resolutions failed to get a minimum nine votes to pass.

Investigators from the Organisation for the Prohibition of Chemical Weapons are traveling to Syriato determine whether a toxic gas was used in the town of Douma, the site of the April 7 incident, and will start work on Saturday. They are not mandated to assign blame.

Syrian U.N. Ambassador Bashar Ja’afari told reporters on Thursday, “We’re ready to escort them to where they want, whenever they want, anytime they want.”

“Any delay or disruption in the visit will be a result of the political pressure exercised on the OPCW from a very well-known state, as the Syrian government expressed its readiness to facilitate this visit,” Ja’afari said.