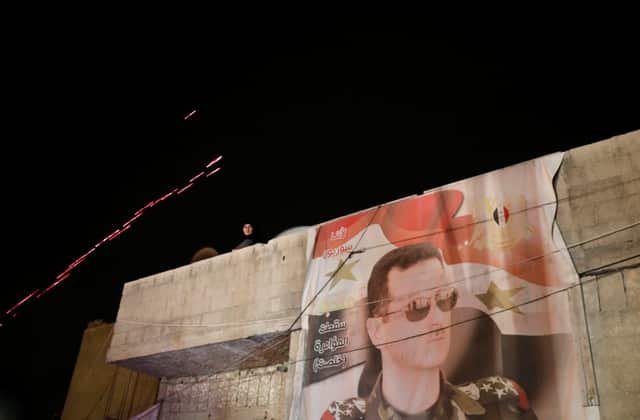 A poster of Syrian President Bashar al Assad in Douma

British ministers planned to gather on Thursday to discuss whether to join the United States and France in a possible military attack on Syria that threatens to bring Western and Russian forces into direct confrontation.

Prime Minister Theresa May recalled the ministers from their Easter holiday for a special cabinet meeting on how to respond to what she has cast as a barbaric poison gas attack by Syrian government forces on civilians in the formerly rebel-held town of Douma just east of the capital Damascus.

Russia, the Syrian government’s most important ally in its seven-year-old war with rebels, said it had deployed military police in Douma on Thursday after the town was taken over by government forces.

“They are the guarantors of law and order in the town,” the RIA news agency quoted Russia’s defence ministry as saying.

U.S. President Donald Trump warned Russia on Wednesday that missiles “will be coming” in response to the April 7 gas attack, alleged to have killed dozens of people, and lambasted Moscow for standing by Syrian President Bashar al-Assad.

Syria’s attempt to shelter aircraft, perhaps by locating them alongside Russian military hardware that Washington might be reluctant to hit, could limit damage that the United States and its allies might be able to inflict on Assad’s military.

Asked if he had seen enough evidence to blame the Syrian president, Mattis said: “We’re still working on this.”

Both Syria and Russia have said reports of the attack were fabricated by rebels and rescue workers in Douma and have accused the United States of seeking to use it as a pretext to attack the government.

In Moscow, the head of a Russian parliamentary defence committee, Vladimir Shamanov, said Russia was in direct contact with the U.S. Joint Chiefs of Staff about the situation.

The Russian military said it had observed movements of U.S. Navy forces in the Gulf. Any U.S. strike would probably involve the navy, given the risk to aircraft from Russian and Syrian air defences. A U.S. guided-missile destroyer, the USS Donald Cook, is in the Mediterranean.

Moscow’s ambassador to Lebanon, Alexander Zasypkin, warned on Wednesday that any U.S. missiles fired at Syria would be shot down and the launch sites targeted.

May has ordered British submarines to move within missile range of Syria in readiness for strikes against the Syrian military that could begin as early as Thursday night, London’s Daily Telegraph newspaper said on Wednesday.

The BBC reported that May was ready to give the go-ahead for Britain to take part in military action. She would not seek approval from parliament, the BBC said, despite calls from the opposition Labour Party for parliament to be given a say.

Parliament voted down British military action against Assad’s government in 2013 in an embarrassment for May’s predecessor, David Cameron. That then deterred the U.S. administration of Barack Obama from similar action.