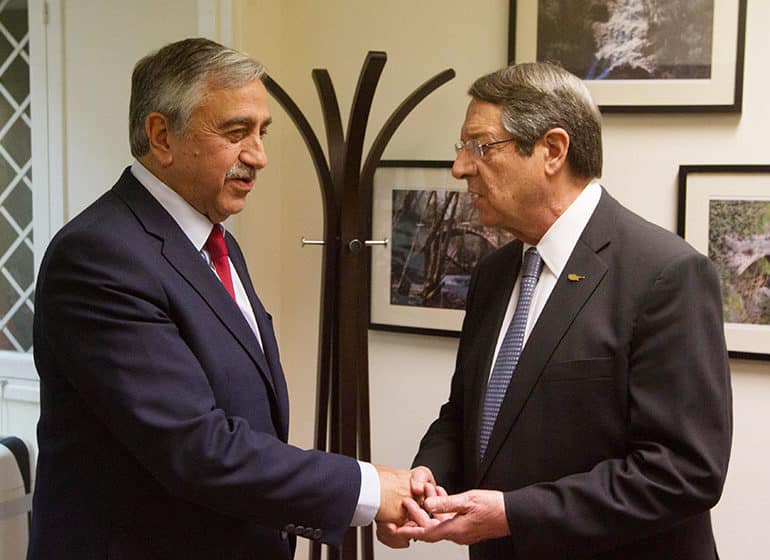 The Greek Cypriot side will go to Monday’s dinner with the Turkish Cypriot leader with the aim of resuming the reunification talks, the government spokesman said on Friday.

He was speaking after President Nicos Anastasiades met with UN Secretary General Special Representative in Cyprus Elizabeth Spehar in the morning.

The UN official said they talked about Monday’s informal meeting where the two leaders, Anastasiades and Mustafa Akinci, would get a chance to speak after several months.

“It is up to the two leaders what they will discuss, there is an open agenda. We will leave it up to them,” Spehar said.

Government spokesman Prodromos Prodromou said no negotiations would take place during the dinner but “the objective, at least for our side, and I hope for both eventually, is the resumption of negotiations where there will be an agenda,”

Echoing Spehar, Prodromou said the absence of an agenda would allow the two leaders to freely exchange views.

The dinner takes place against a backdrop of mistrust between the two sides and the added thorn concerning the Republic’s natural gas activities, which Turkey and the Turkish Cypriots strongly dispute.

The latest round of UN-led talks collapsed in acrimony in Switzerland in July 2017 and developments over the gas issue have made conditions worse.

Greece’s Prime Minister Alexis Tsipras stressed the need for the creation of the necessary conditions for the resumption of the talks during a telephone conversation with Anastasiades on Friday.

In a written statement, deputy government spokeswoman Klelia Vasiliou said the two leaders reviewed current developments in the region, with a particular emphasis on Monday’s dinner.

Greece’s PM “fully supports” Anastasiades’ “position and the need for the creation of the necessary conditions for the resumption of bicommunal dialogue, so that a solution can be reached on the basis of United Nations resolutions and Cyprus’ status as a European Union member, starting with a dialogue within the framework of UN Secretary General, as it was expressed in Crans – Montana,” the statement reads.

Meanwhile, 150 people, among them former President George Vassiliou, signed a petition calling on the leaders of both communities ‘to take immediate initiatives to overturn stagnation and pave the way for a settlement of a bizonal-bicommunal federation with political equality of the communities as set out in the relevant Security Council Resolutions’.

The appeal, signed by Greek Cypriots and Turkish Cypriots, calls on Anastasiades and Akinci to openly commit themselves to reaching an overall agreement with mutual concessions within a short period of time.

What must be done is very specific, the group said:  “Both sides to declare that they accept the Guterres framework and informal document, as delivered and as interpreted by the secretary-general himself”.

In addition, they called on the two leaders to declare themselves ready for an international conference on security and guarantees ‘before other events (drilling for hydrocarbons, elections in Turkey, etc.) poison again the climate and lead to a new crisis’.

On the basis of the above, the said, the basic parameters of the Cyprus problem will be resolved and there will be enough time to address the outstanding, less important issues.

“At the initiative and responsibility of all Cypriots we can live peacefully and civilized in our country and ensure our independence as a state and our future course as a multicultural society within Europe,” they said.

They warned that time for a settlement of the Cyprus problem is dangerously exhausted, and the consequent predictable political developments are ‘nightmarish’.

“Ankara’s warnings for continuing its interventions in Cyprus and the entire region of the Eastern Mediterranean continue and intensify. To the extent that the international community does not hold Ankara responsible for the impasse in the Cyprus issue, it does not show any willingness to actively support Cyprus,” they said.

If this scene is established, the group said, the end of the Cyprus issue will be tragic both for the Greek Cypriot and the Turkish Cypriot community.

Assad ally Hezbollah does not see “total war” over Syria