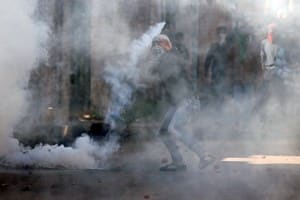 A protester throws back a teargas canister fired by Indian police during a protest against the recent killings in Kashmir, in Srinagar

A lawmaker from India’s ruling party was arrested on Friday in connection with the rape of a teenager, police said, after days of protests by activists accusing authorities of failing to investigate the case and other attacks.

Campaign groups called more rallies over the weekend, demanding justice for the young woman and for an eight-year-old Muslim girl who was gang-raped and murdered in the divided state of Kashmir.

The rallies, which echoed mass protests against sexual violence in 2012, have piled pressure on Prime Minister Narendra Modi who, hours earlier on Friday, had promised to take action.

The BJP lawmaker, Kuldeep Singh Sengar from the legislature of the northern state of Uttar Pradesh, was arrested in connection with the rape case, senior state police officer Rahul Srivastav told Reuters.

“He will be presented before the court and charges will be pressed on Saturday,” the officer added, without saying what charges he would face. Sengar’s lawyer, R.K Singh, earlier said his client was innocent and the case was a conspiracy to harm his political career.

Opposition groups have joined protests and vigils in cities across India, calling for tougher action.

“We are urging every rights group to seek public support and take to the streets across India, the guilty must be punished as soon as possible,” said Ramya Varshney, a member of Awaaz, a voluntary organization providing legal advice to rape victims.

Rights groups have accused the police of taking too long to investigate the attack on the teenager, who reported she was raped in June last year.

The eight-year-old Muslim girl, Asifa, was found dead in a Hindu-dominated area of Jammu and Kashmir state in January. Anger erupted this week when details of her ordeal were released in a police charge sheet.

Underlining the political tensions over the case, some members of the ruling BJP party joined a rally organised by a hardline Hindu group earlier this week to show support for eight Hindu men accused of the crime, including a former bureaucrat and four police officers.

On Friday, two of those BJP members resigned as anger mounted over the rally.

Amid fears the case could escalate unrest in Kashmir where security forces are battling a long-running insurgency, separatist leader Mirwaiz Umar Farooq vowed to launch a mass agitation if any attempt was made to shield culprits or sabotage investigations.

Thousands of Kashmiris joined street protests in Srinagar this week, following the death of four protesters in a clash with security forces.

“Yet again we’ve failed as a society,” Bollywood actor Akshay Kumar said in a Twitter message.

“Can’t think straight as more chilling details on little Asifa’s case emerge … her innocent face refuses to leave me. Justice must be served, hard and fast!”

Opposition leader Rahul Gandhi held a candlelit vigil at midnight on Thursday at India Gate in New Delhi, the same site where thousands of people demonstrated in 2012 against a brutal gang-rape in the capital.

“Like millions of Indians, my heart hurts tonight,” Gandhi wrote on Twitter after addressing an estimated crowd of 5,000 people at the event. “India simply cannot continue to treat its women the way it does.”

Ministers have said justice will be done no matter who committed the crime, while defending the government’s record on fighting violence against women.

Maneka Gandhi, the minister for women and child development, said her ministry planned to propose the death penalty for the rape of children younger than 12. The maximum punishment now is life imprisonment.