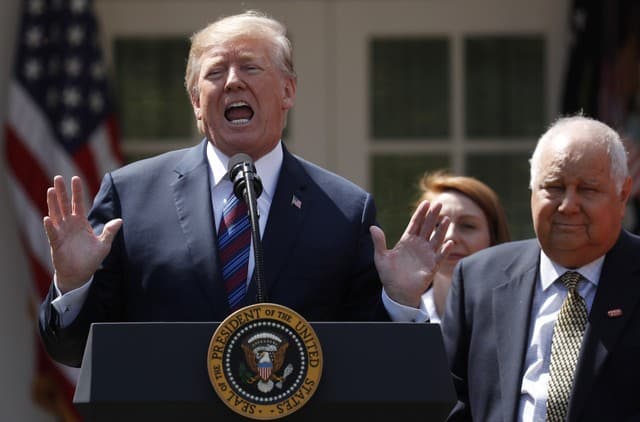 U.S. President Donald Trump tweeted: '"Never said when an attack on Syria would take place. Could be very soon or not so soon at all!"

President Donald Trump and his national security aides on Thursday discussed U.S. options on Syria, where he has threatened missile strikes in response to a suspected poison gas attack, as a Russian envoy voiced fears of wider conflict between Washington and Moscow.

Worries about a confrontation between Russia, Syria’s big ally, and the West have been running high since Trump said on Wednesday that missiles “will be coming” in response to the attack in the Syrian town of Douma on April 7, and lambasted Moscow for standing by Syrian President Bashar al-Assad.

Trump tempered those remarks on Thursday and even as he consulted allies such and Britain and France, who could join in any U.S.-led strikes on Syria, there were signs of efforts to prevent the crisis from spiraling out of control.

“Never said when an attack on Syria would take place. Could be very soon or not so soon at all!” Trump wrote on Twitter, raising the prospect that an attack might not be as imminent as he seemed to suggest the day before.

Trump met his national security team on the situation in Syria later in the day and “no final decision has been made,” the White House said in a statement.

“We are continuing to assess intelligence and are engaged in conversations with our partners and allies,” it said.

That did not necessarily signal, however, that Trump was cooling to the idea of military action, especially given the high stakes in Syria. U.S. officials noted that Washington was still assessing intelligence and coordinating allies.

Trump spoke to British Prime Minister Theresa May on Thursday and the two leaders talked about the “need for a joint response to Syria’s use of chemical weapons,” the White House said.

May’s office said they agreed on the need to deter Assad’s government from further such attacks.

Trump was also due to speak with French President Emmanuel Macron, who said France had proof the Syrian government carried out the attack near Damascus, which aid groups have said killed dozens of people, and will decide whether to strike back when all the necessary information has been gathered.

“We have proof that last week … chemical weapons were used, at least with chlorine, and that they were used by the regime of Bashar al-Assad,” Macron said, without offering details of any evidence.

Two U.S. officials familiar with an investigation of samples from Douma and the symptoms of victims said initial indications that a mix of weaponized chlorine gas and sarin were used in the attack appeared to be correct. But U.S. intelligence agencies have not completed their assessment or reached a final conclusion, the officials said.

Russia, Syria and its other main backer, Iran, have said reports of the Douma attack were fabricated by rebels and rescue workers and have accused the United States of seeking to use it as a pretext to attack the Syrian government.

Russia said it deployed military police in Douma on Thursday after the town was taken over by government forces.

“They are the guarantors of law and order in the town,” RIA news agency quoted Russia’s defense ministry as saying.

There were signs of a global effort to head off a direct confrontation between Russia and the West. The Kremlin said a crisis communications link with the United States, created to avoid an accidental clash over Syria, was in use.

Vassily Nebenzia, Moscow’s ambassador to the United Nations, said he “cannot exclude” war between the United States and Russia and urged Washington and its allies to refrain from military action against Syria.

“The immediate priority is to avert the danger of war,” he told reporters. “We hope there will be no point of no return,” the envoy said.

A team of experts from the global chemical weapons watchdog, the Organisation for the Prohibition of Chemical Weapons, was traveling to Syria and will start its investigations on Saturday, the Netherlands-based agency said.

It was not clear whether Trump and U.S. allies would wait for the results of the investigation before deciding on a strike.

U.S. Defense Secretary Jim Mattis told Congress he believed there was a chemical attack in Syria, but added a short while later that the United States had not made any decision to launch military action. He also suggested he was examining ways to prevent any strikes from triggering a broader conflict.

“I don’t want to talk about a specific attack that is not yet in the offing … This would be pre-decisional,” Mattis told the House of Representatives Armed Services Committee.

Moscow is estimated to have dozens of aircraft at its Hmeymim air base in Syria including fighters and bombers, as well as 10 to 15 warships and support vessels in the Mediterranean.

Nervous world stock markets showed signs of recovery after Trump’s signal that military strikes might not be imminent.

Britain’s May won backing from her senior ministers to take unspecified action with the United States and France to deter further use of chemical weapons by Syria.

May had recalled the ministers from their Easter holiday for the meeting to discuss Britain’s response to what she has cast as a barbaric attack that cannot go unchallenged.

Russian ships had left the Tartus naval base in Syria, Interfax news agency quoted a Russian lawmaker as saying. Vladimir Shamanov, who chairs the defense committee of the lower house, said the vessels had departed the base for their own safety, which was “normal practice” when there were threats of attack.

Any U.S. strike would probably involve the Navy, given the risk to aircraft from Russian and Syrian air defenses. A U.S. guided-missile destroyer, the USS Donald Cook, is in the Mediterranean. Last year, the United States carried out strikes from two Navy destroyers against a Syrian air base after another deadly toxic gas attack on a rebel-controlled area.

Bomb kills up to five during football match in Somalia