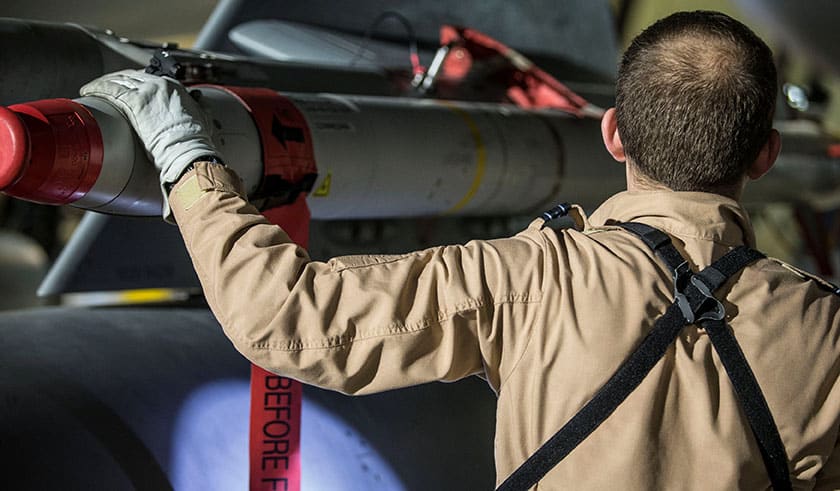 Britain’s Prime Minister Theresa May only informed President Nicos Anastasiades just after midday on Saturday about the air strikes on Syrian targets, hours after the British base at Akrotiri had been used to launch the British attack.

According to the government spokesman, Prodromos Prodromou, May called Anastasiades to brief him on the military action in Syria and to reassure him that there was no question of any danger to Cyprus.

Four Royal Air Force Tornado jets from the Akrotiri base in Cyprus fired Storm Shadow missiles during the early hours of Saturday at a military facility near Homs where it was assessed that Syria had stockpiled chemicals, Britain’s ministry of defence said.

The British PM told Anastasiades that the aim of the operation was to send out a strong message against the use of chemical weapons, according to Prodromou.

She also explained that there was “limited use of the British bases”, Prodromou said.

Earlier, Prodromou had conceded that the government had no prior briefing or involvement in the action launched from Akrotiri.

“Cyprus did not have any participation in this operation and conditions of full security exist in our country,” government spokesman Prodromos Prodromou had said in a statement earlier in the day.

“The authorities of the Republic of Cyprus have been monitoring the situation from the first moment, however, Cyprus did not receive any prior briefing,” he said.

Neither the airspace of Cyprus, or its flight information region (FIR) – a huge swathe of eastern Mediterranean airspace – was used, he said.

“This particular military operation did not pass through Cyprus. It was specifically done from the southern sea,” he said.

Cyprus airspace was not used “with the exception of what is always the case in the British bases, which are not under the control of the Cypriot government”.

Former Foreign Minister, Ioannis Kasoulides said that under the 1960 Treaty of Establishment of the Republic of Cyprus, Cyprus has no say in the bases’ actions, but he seemed to question why the government had not been informed of the use of the bases beforehand.

“But we do demand and we always have to be informed, and I have no doubt that this kind of consultation must have already taken place,” Kasoulides said, speaking before May’s phone call.

He added that the bases “are not those of scouts”.

“They are military bases to be used by forces, in this case, Great Britain,” Kasoulides said.

Cyprus, he said, was not affected by this operation.

“I believe that it will be forgotten in the coming days, also by those wishing to book their holidays in Cyprus,” he said.

The wait for the air strike, he said, was more painful than the strike itself.

The air strikes did not affect any flight schedules to and from Cyprus, said the spokesman of Hermes airports, Adamos Aspris.

Aspris said that Saturday’s flight schedules at both Larnaca and Paphos airports were running smoothly.

“There are no cancellations or flight delays,” he said.

The Civil Aviation department also reiterated that the air strikes had not affected “the safe and smooth air traffic management” of the Nicosia FIR.

“The situation in the Nicosia FIR was completely controlled during (the Syria) operations and service provision continued smoothly and as normal and no incidents were observed,” it said.

The transport ministry, it said, was in constant contact with both European organisations and the competent authorities of neighbouring states.

Prodromou said earlier in the week that Nicosia had received no requests by other countries to provide facilities for military operations against the Syrian regime.

On the possible use of the British bases in Cyprus, Prodromou had said that the status of the bases “is known”.

But main opposition, Communist Akel, was highly critical of the government which it said had allowed Cyprus, “a victim of similar machinations”, to be used as a base for such attacks.

The administration of Nicos Anastasiades was not entitled to involve Cyprus in any way “in the crime against the people of Syria”.

The party said it was not legitimate for the UK government to use the British bases and the airspace of the Republic of Cyprus for any military operations against neighbouring states and peoples.

It described the air strikes on targets in Syria as illegal and a “violation of the sovereignty and territorial integrity of Syria”.

Akel called for a mass anti-war rally on Monday outside the US embassy in Nicosia organised by the Cyprus Peace Council to protest over the strikes.

Justice Minister, Ionas Nicolaou, said on Saturday that police for precautionary reasons have stepped up security measures in places “relating to countries involved in the Syria crisis”.

He gave reassurances that Cyprus faces no risks.

Nicolaou said that patrols had intensified around these places on Friday and additional measures were taken following the air strikes. This concerns embassies, schools, companies, residences and other areas concerning interests of the countries involved, such as the US, Russia, the UK, France and Israel, he said.

“What we are basically seeking through these measures is to protect the interests of these countries, which may be at risk from the acts of some people who are in Cyprus,” Nicolaou said.

He stressed there was no information of an external threat and no danger from such a thing.

The best moments captured on film

Britain says we had to attack Syria, strikes highly successful