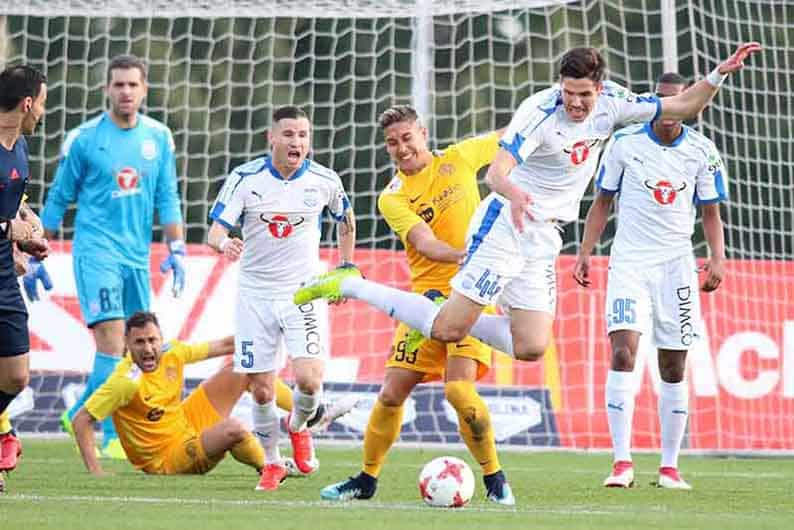 Action from the opening playoff game between Apollon and AEL

The Cyprus football championship enters the final stretch this weekend as the second and final round of the playoffs begins. With just five games remaining any slip-ups may prove costly especially in the race for the championship as two points separate Apollon and Apoel.

Apollon, undoubtedly the most entertaining and attack minded team this season, face their fellow Limassolians AEL at the Tsireion stadium.

In the corresponding first round playoff fixture Apollon ran riot and thumped five past AEL resulting in the immediate resignation of AEL’s coach Bruno Baltazar.

Dusan Kerkez, AEL’s new coach, has managed to add some passion and steel in his teams play and will be looking to avenge AEL’s heavy defeat to their bitter local rivals a few weeks ago.

The suspended Mitrea will be replaced by Dossa Junior at the heart of the defence.

Apollon come to this game at the back of two easy wins against Omonia in the league and Anorthosis in the cup and given their recent form they will be favourites to win the game.

Despite having three players ruled out through injury coach Sofronis Avgousti is still spoiled for choice. The Cypriot coach has managed to rotate his squad, especially his strikers, without this affecting Apollon’s performance who have just one loss in the playoffs.

Not the same can be said about second placed Apoel who are going through a sticky patch resulting in just two wins from their opening five playoff games.

Apoel face arch rivals Omonia at the GSP 24 hours after the Limassol derby and they will looking to return to winning ways against a team that has not defeated them in five years.

Apoel’s coach Bruno Baltazar has three of his wide players sidelined through injury and it will be interesting to see if he puts faith in Makris, his only other recognized wide player, despite featuring in the starting eleven just once this season.

Omonia, remain the only team not to have picked up a single point in the playoffs so far and with 2 defeats in the last two games of the regular season they are on a 7 game losing streak.

Their caretaker coach Jesper Fredbergh was glad to see four of his players return to full training but Kante and Ekiza are still out through suspension and injury.

The final top group game is between third placed Anorthosis and the team just below them AEK at the Anotnis Papadopoulos.

Three points separate the two teams and a win for the home side will place them firmly in pole position for third place.

Our View: Banks have to pay big bucks for good bosses