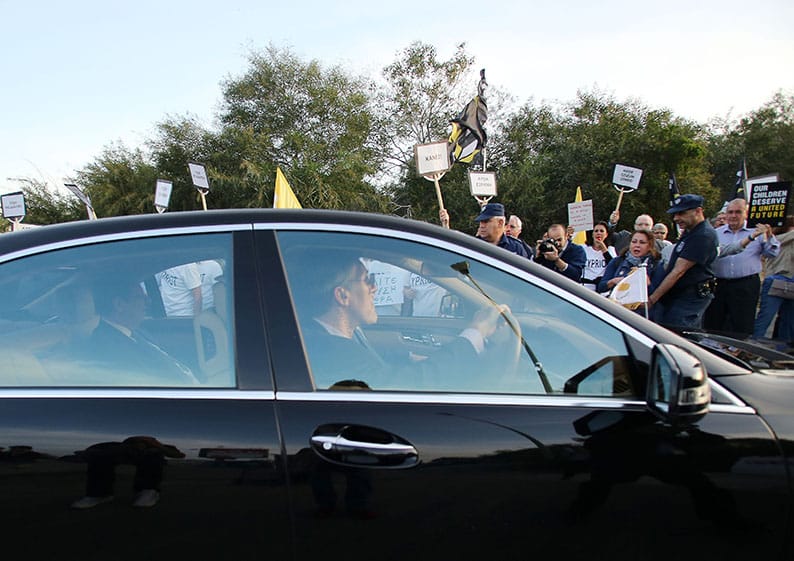 File photo: President Anastasiades' car drives past peace demonstrators on his way to his meeting with Turkish Cypriot leader Mustafa Akinci inside the UN buffer zone on Monday

The leaders of the two communities, President Nicos Anastasiades and Turkish Cypriot leader Mustafa Akinci, held a frank and open exchange of views the UN said on Monday after the two men met for dinner for the first time since talks collapsed in Switzerland last July.

The aim of the meeting – hosted by UN Secretary-General’s Special Representative in Cyprus, Elizabeth Spehar at the chief of mission’s residence in the buffer zone – was to try and kick-start the resumption of Cyprus talks.

Following the dinner, Spehar said in a brief written statement that the two leaders “had a frank and open exchange of views during a two hour tête-à-tête discussion”.

They then proceeded to a dinner with Spehar, the statement concluded. The dinner ended at around 10.30 pm.

On his return to the presidential palace, Anastasiades said that no side would object to the possibility of the UN Secretary-General Antonio Guterres appointing a special envoy to look into the possibilities of a new dialogue, and this would determine if a new preparatory period could be launched.

At the face to face meeting, Anastasiades said, they had an honest discussion “on the problems faced, the prospect of a new dialogue, we registered the disagreements”.

He said he reiterated his readiness to resume the dialogue from where it ended last July at the Swiss resort of Crans-Montana.

Akinci, he said, raised the issue of a joint committee to deal with the management and exploitation of natural resources. Anastasiades said he responded that there was no question of it being discussed at the negotiation table “either the postponement of the energy programme or that of the joint committee”.

Anastasiades said that there was discussion on whether one or the other side insists on some positions, but that there was no detailed dialogue or negotiation.

He also said that they have agreed that by July 1 the Dherynia crossing might open, and by mid -September the one in Lefka-Apliki. Anastasiades and Akinci originally agreed in May 2015 to open crossings at Dherynia and Lefka-Apliki but work has not been fully completed.

Asked if there was common ground at the meeting, he said “only if you consider common ground to be the realisation that both sides stuck to their positions”.

Citing a UN source, the Cyprus News Agency had said prior to the meeting that the length of the dinner would depend on the two leaders, and they would decide whether to make statements to the media afterwards or give the green light to the UN to put out a statement.

“It has always been and remains a process under the leadership of the leaders,” the UN source said, adding that the success of the process lay with the leaders.

As the two leaders made their way to the residence at around 7pm, groups and organisations from both sides of the divide gathered outside the entrances to the Nicosia airport in the north and south. Their aim, they said, was to “mobilise and impress” on the two leaders the need for an immediate breakthrough and resumption of the talks based on the framework of UNSG Antonio Guterres without any preconditions.

A delegation of the Bicommunal Peace Initiative – United Cyprus – that brings together more than 70 organisations working for peace and reunification – had a meeting with Spehar earlier in the day, and delivered a message addressed to the two leaders with the request it be conveyed to them during the dinner. In the letter, they urge Anastasiades and Akinci “to live up to the expectations” of Cypriots and reconvene a negotiation process that would lead to an agreed solution.

Akinci did not immediately make any comments after the dinner but reiterated on Sunday that if there was political will, “there can be a way out of the current deadlock”.

Speaking at an event, he said he was working for lasting peace, adding that he did not have great expectations from the dinner but neither did he want to present a pessimistic picture of the future.
He also said that both communities had suffered in the past and wanted future generations to live in peace and share the wealth of the island.

The Greek Cypriot side made it clear the dinner would not have an agenda and was not part of the negotiations and as such the leaders would be free to raise any issues they wanted.

The purpose of the dinner was to only explore the possibility of resuming reunification talks.

In an urgent intervention at the plenary session of the European Parliament on Monday, MEP Takis Hadjigeorgiou called on President Antonio Tajani and all political groups to support the two leaders in Cyprus in their attempt to break the stalemate. He also asked them to send out the message that Turkey cannot insist on the presence of its troops on the island and the continuation of guarantees as part of a settlement solution.

A lot of water has gone under the bridge since the talks’ collapse in July last year with Turkish warships preventing Cyprus from drilling for gas in seas east of the island while Turkish Cypriots ramped up their rhetoric, calling for joint exploration and exploitation of offshore hydrocarbons with the Greek Cypriots.

Getting your musical feet wet

Akel protests against Syria strike and use of British bases