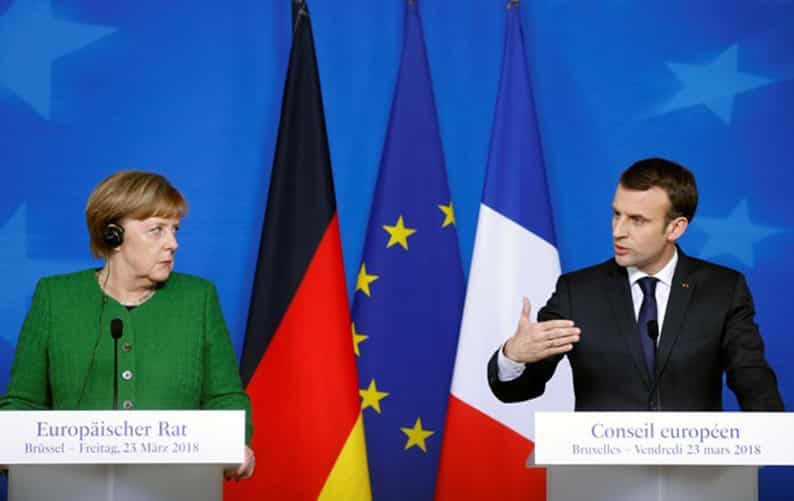 A draft resolution for German lawmakers drawn up by leading members of Merkel’s conservative bloc rejects plans floated by the executive European Commission to make use of a specific EU legal provision to create a European Monetary Fund (EMF).

Instead, the conservatives say that setting up an EMF under European law would require treaty change “in consultation with national parliaments” – a tricky feat that would take time. They also want an independent EMF, free of European control.

By floating the resolution ahead of Macron’s working meeting with Merkel on Thursday, the conservative lawmakers are flexing their muscles, seeking to safeguard the Bundestag’s ability to veto euro zone aid packages and restricting reform of the bloc.

“I know that Macron is pushing Merkel and she is not moving in the way he thinks she should be moving,” said a person close to the French president, adding that he may have to adopt a more confrontational tone with Germany.

“He will have to,” added the person, who spoke on condition of anonymity. “And his basic point will have to be: I’m spending a lot of capital in France to modernise the country. I promised that I would do this and I’m delivering. This is a credit that has to be paid.”

Macron was elected last May on a promise to overhaul the European Union. He has called for the euro zone to have its own budget and finance minister, and for the currency bloc’s rescue fund, the ESM, to be turned into a mechanism – like an EMF – for helping member states pre-empt threats of financial instability.

But Merkel, whose political capital is depleted after she lost support in last September’s national election, faces fierce resistance from her conservatives to any reforms that would see German taxpayers assume liability for other countries’ debts.

At a meeting on Monday, the executive committee of Merkel’s Christian Democrats (CDU) focused on how to fill the looming hole in the EU’s budget that Brexit will cause rather than discussing a potential budget specifically for the euro zone.

Annegret Kramp-Karrenbauer, CDU secretary general, said a euro zone budget was not a priority: “I don’t think that would make sense,” she told reporters.

In their draft resolution, her conservative bloc called for a parliamentary working group to present a draft bill on the EMF issue by the end of April for lawmakers to vote on in June. It was widely seen as a bid to control the terms of the debate though they recognised the outcome of the vote would be non-binding for the government.

Finance Minister Olaf Scholz, a member of the Social Democrats, Merkel’s coalition partner, said in a weekend newspaper interview that EU reforms proposed by Macron should be addressed before European elections next year. But he said some of the proposals were not feasible.

In a proposal for discussion at a meeting of the conservative parliamentary bloc on Tuesday, the group’s deputy leader, Katja Leikert, stressed that individual euro zone member states must remain liable for their own risks.

“Financial aid will only be granted with strict conditions,” read the proposal, seen by Reuters, adding that German lawmakers must retain the right to decide on granting financial aid to other euro zone member states.

The robust stance taken by German lawmakers on the euro zone issue threatens to complicate the reform process this year, which is seen as a critical but narrow window, with the European Parliament holding elections and Britain’s exit from the EU reaching its deadline in 2019.

A French presidential adviser said Macron would use a speech in Strasbourg on Tuesday to jolt European partners into action.

“It won’t be a speech to make the same proposals again or say the same things, it will be a speech about this European moment and to show it’s urgent to act,” the advisor said.

Macron and Merkel pledged last month to overcome differences to formulate a roadmap for euro zone reform in time for it to be approved by their European peers in June.

“This is going to be a decisive week if we are going to come up with something by June,” a French Finance Ministry source said.

Government aims to double industry’s share of GDP by 2030