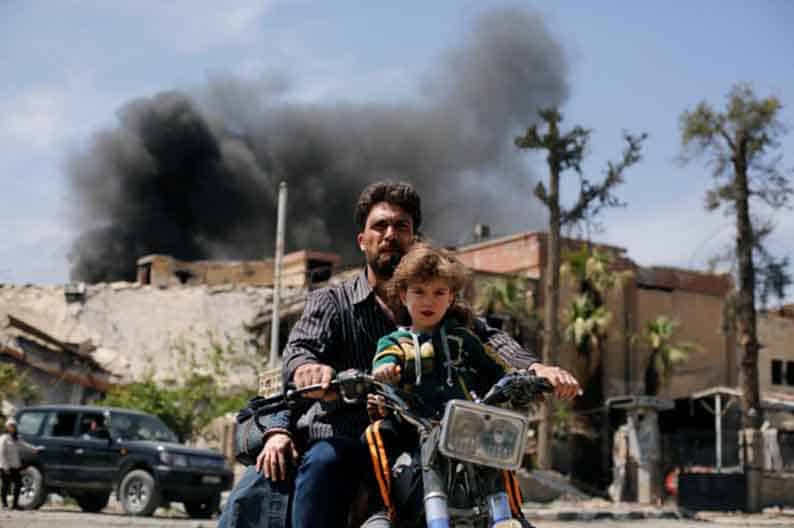 By Laila Bassam and Anthony Deutsch

The United States accused Russia on Monday of blocking international inspectors from reaching the site of a suspected poison gas attack in Syria and said Russians or Syrians may have tampered with evidence on the ground.

Moscow denied the charge and blamed delays on retaliatory US-led missile strikes on Syria at the weekend.

British Prime Minister Theresa May and French President Emmanuel Macron faced criticism from political opponents over their decisions to take part in the air strikes.

Syria and Russia deny unleashing poison gas on April 7 during their offensive on Douma, which ended with the recapture of the town that had been the last rebel stronghold near the capital Damascus.

Relief organisations say dozens of men, women and children were killed. Footage of young victims foaming at the mouth and weeping in agony has thrust Syria’s civil war — in which half a million people have been killed in the past seven years — to the forefront of world concern again.

Inspectors from the Hague-based Organization for the Prohibition of Chemical Weapons (OPCW) travelled to Syria last week to inspect the site, but have yet to gain access to Douma, which is now under government control after the rebels withdrew.

“It is our understanding the Russians may have visited the attack site,” US Ambassador Kenneth Ward said at an OPCW meeting in The Hague on Monday.

“It is our concern that they may have tampered with it with the intent of thwarting the efforts of the OPCW Fact-Finding Mission to conduct an effective investigation,” he said. His comments at the closed-door meeting were obtained by Reuters.

Russian Foreign Minister Sergei Lavrov denied that Moscow had interfered with any evidence. “I can guarantee that Russia has not tampered with the site,” he told the BBC.

Two days after the missile strikes which he hailed as a well-executed military operation, President Donald Trump still wants to bring the small number of U.S. troops in northern Syria home, the White House said.

But spokeswoman Sarah Sanders said he had not set a timeline for a pull-out. Trump was also willing to meet Russian President Vladimir Putin, she added, while indicating that no such encounter was imminent.

Britain’s delegation to the OPCW accused Russia and the Assad government of stopping inspectors from reaching Douma. “Unfettered access is essential,” it said in a statement. “Russia and Syria must cooperate.”

The team aims to collect samples, interview witnesses and document evidence to determine whether banned toxic munitions were used, although it is not permitted to assign blame for the attack.

Moscow blamed the delay on the air strikes, in which the United States, France and Britain targeted what the Pentagon said were three chemical weapons facilities.

“We called for an objective investigation. This was at the very beginning after this information (of the attack) appeared. Therefore allegations of this towards Russia are groundless,” Kremlin spokesman Dmitry Peskov said.

A Russian defense ministry official later said the OPCW experts would travel to Douma on Wednesday.

The RIA news agency quoted the ministry as saying the Syrian military destroyed 71 out of 103 cruise missiles detected in Syrian airspace.

The inspectors met Syrian Deputy Foreign Minister Faisal Mekdad in the presence of Russian officers and a senior Syrian security official in Damascus for about three hours on Sunday.

OPCW inspectors have been attacked on two previous missions to the sites of chemical weapons attacks in Syria.

Syrian flags flew in Douma on Monday, security forces stood on street corners and Russian military police patrolled the streets. State aid trucks handed out bread, rice and pasta to people who had lived under siege for years.

A government-organised media tour did not include the building where, according to rescue workers and medics who were in town at the time, dozens of people were killed by poison gas.

Doctors at the hospital where suspected victims were treated told reporters on the tour that none of the patients that night had suffered chemical weapons injuries — they were asphyxiated by dust and smoke in a bombardment.

Medical aid groups and the White Helmets rescue organisation have said such statements – already aired on state television in recent days – were made under duress.

At a meeting in Luxembourg, the 28 EU foreign ministers endorsed the missile strikes and considered steps to deepen Assad’s isolation.

The Western leaders faced scrutiny at home over their actions, with Britain’s May facing questions over why she did not seek parliamentary approval for the action.

She told parliament the decision to conduct air strikes against Syria was in the British national interest and not as a result of pressure from Trump.

“We have not done this because President Trump asked us to, we have done it because we believed it was the right thing to do, and we are not alone. There is broad-based international support for the action we have taken,” May said.

May has said she did not seek a green light from parliament for the attacks due to the need to act quickly.