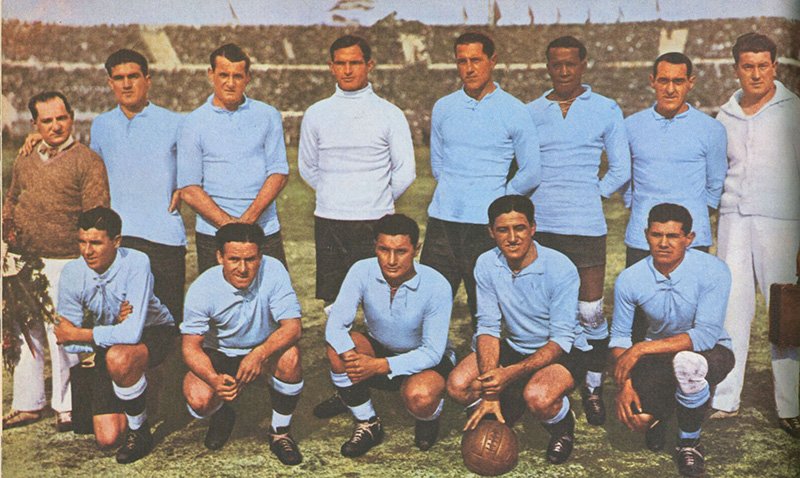 Uruguay, the first ever World Champions

The inaugural FIFA World Cup took place in 1930 and was held in Uruguay.

FIFA President Jules Rimet came up with the idea of a tournament featuring the world’s best international sides and Uruguay, the holders of the Olympic football title, were the only country to volunteer as host nation.

The pre-tournament favourites, who won every match en route to the final, then beat Argentina 4-2 to be crowned world champions.

It remains the only World Cup where countries did not have to qualify. Thirteen teams (seven from South America, four from Europe, and two from North America) entered the tournament. Only a few European teams chose to participate due to the difficulty of travelling to South America.

All matches took place in the capital Montevideo, with only three stadiums used.

There were four groups of teams, with each winner progressing to the semi-finals.

The event kicked-off with two matches played simultaneously and were won by France and the United States.

The tournament also saw Placido Galindo become the first player to be sent off in a World Cup match, playing for Peru against Romania.

Hosts Uruguay won the first ever final, beating Argentina 4-2 in front of a crowd of around 93,000 people in Montevideo in an entertaining game.

Both nations went into the showpiece having won every match en route to the final. It was also a repeat of the 1928 Olympic football tournament, which Uruguay had won 2-1.

Interestingly, the final consisted of two match balls. The first was picked by Argentina and was used in the first half. The second ball was chosen by Uruguay and was used after half-time. This was due to a dispute between both countries and it was the Belgian referee John Langenus who came up with the idea.

Pablo Dorado opened the scoring for Uruguay but Argentina leveled the score 8 minutes later through Carlos Peucelle. The tournament’s top scorer Guillermo Stabile gave the Argentinians the lead shortly before the break.

Uruguay started the second half on the front foot but it was Argentina’s Monti who missed a glorious chance to give his side a two-goal advantage.

Pedro Cea was not so forgiving a few minutes later and equalized for the hosts with Sandro Iriarte putting Uruguay back in the driving seat 10 minutes later. Just before the final whistle Castro netted a fourth goal making sure that the first ever World Cup would go to Uruguay.

Uruguay declared the next day a national holiday, while in Buenos Aires, the Uruguayan Consulate was stoned by an angry crowd until the police opened fire.

John Stamos has become a father for the first time