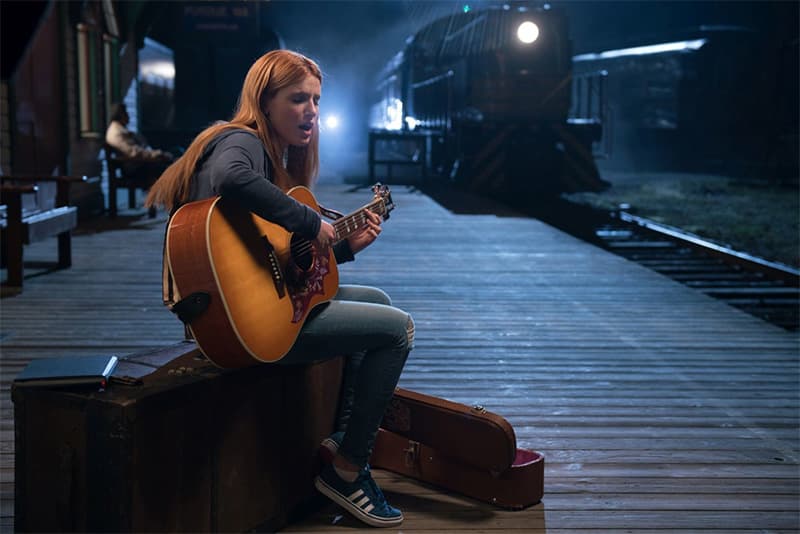 Character names are out of control this week. Dwayne Johnson is ‘Davis Okoye’ in Rampage: Total Chaos, which is weird since he doesn’t look especially Nigerian, while Bella Thorne is ‘Katie Price’ in Midnight Sun – a reasonable name, you might think, except that it’s also the real name of the busty British model and reality-show winner who calls herself Jordan, bringing unwanted and frankly inappropriate overtones to this sensitive drama, a teenage weepie in a tradition stretching from Love Story to The Fault in Our Stars.

Never mind reality shows, this Katie doesn’t even live in reality – or at least the reality of her 17-year-old peers, who wander from classes to parties while she sits at her window, watching the world go by. Katie’s high-school ‘graduation’ is a case of her much-loved dad (Rob Riggle) putting on a cap and gown and handing her a home-school graduation present, an old guitar that belonged to her mum – a fitting gift as her only real pastime is busking in the train station at night, strumming her guitar and singing sappy songs she writes herself (they have titles like ‘I’ll Keep Reaching’). It has to be at night, because she can’t go out during the day: Katie has a rare condition called xeroderma pigmentosum (XP), and any exposure to sunlight could be fatal. Like a vampire – which she probably would’ve been five years ago, when vampires were trendy – she lives for the darkness, lurking in the shadows in daytime.

Midnight Sun is a modest affair, squarely aimed at the blubbier end of the young-adult market. The gushy romantics – a True Love so pure, so impossible, it’s finally dearer than life itself – can get you if you let them, and indeed they got me (yeah, I’m a sap). That said, the film is pretty terrible, a flimsy confection played with the plastic unreality of a made-for-TV drama.

The actors don’t exactly help. Fault in Our Stars had the lively and expressive Shailene Woodley but Thorne is a less engaging presence, dead-eyed as a hologram, languishing vacantly with the air of every beautiful girl with a mystery illness (she has a tendency to stare with her mouth slightly open). Patrick Schwarzenegger – son of Arnold – is considerably worse as Charlie, the neighbour whom Katie has spent her life admiring from afar, playing his scenes with a fixed, benevolent smile that shows all his teeth. Their first meeting at the train station, with flustered Katie frantically trying to unsling her guitar while Charlie smiles and smiles, is painful indeed. It’s almost a shock when Riggle (a fine, experienced actor) gets his own emotional speech and reminds us how it’s done – though even he can’t save some of the dialogue. Doctor: “This disease affects one in 1,000,000 people”. Dad: “Then we’re in luck – because she’s one in a million!”

XP is real, we’re informed, though that doesn’t quite explain Katie’s predicament. There seems no reason why she couldn’t go out in a burqa-type outfit occasionally, especially since she does go out – wearing nothing more than a hoodie – towards the end of the film, to cheer Charlie on at his swim meet. It’s even odder that no-one in town seems to know her, much less visit her (she has exactly one friend); after all she’s not contagious, or an invalid. Even Boo Radley had a higher profile.

It’s all part of the film’s ardent silliness, sure to be forgiven by its teen-girl demographic. Charlie is almost comically perfect (not only does he take our heroine to her first party, he considerately brings her a bottle of water too: “Gotta stay hydrated!”). The two go out on the ‘best night of our lives’, a trip to Seattle where Katie attends her first concert, sings her songs for a big-city audience – the urbanites lap it up, rather implausibly gathering round to clap and cheer; the song, we’re later told, has amassed two million views on YouTube in just two weeks! – and ends up canoodling on the beach back home. Alas, she can’t bring herself to tell Charlie about the illness – then, when he does find out, she shuts herself away and refuses to talk to him. “I’m not going to be the one that hurts him,” she insists masochistically, and a little bafflingly. Maybe the teen-girl demographic can make sense of it.

Midnight Sun is really best avoided; there’s no good reason why a grown-up should spend money on this. Yet it does semi-work as a wallow in delicious defeatism, the maudlin self-pity of a great, transcendent love and a brave, transcendent demise – and besides, when all else fails you can always kill time with pointed questions like ‘Why do they eat nothing but Chinese food?’ and ‘How much did M&Ms pay for the product placement?’. I didn’t hate this film, but scale your expectations way down. This Katie is cut-Price.

Drop in temperature forecast over next three days