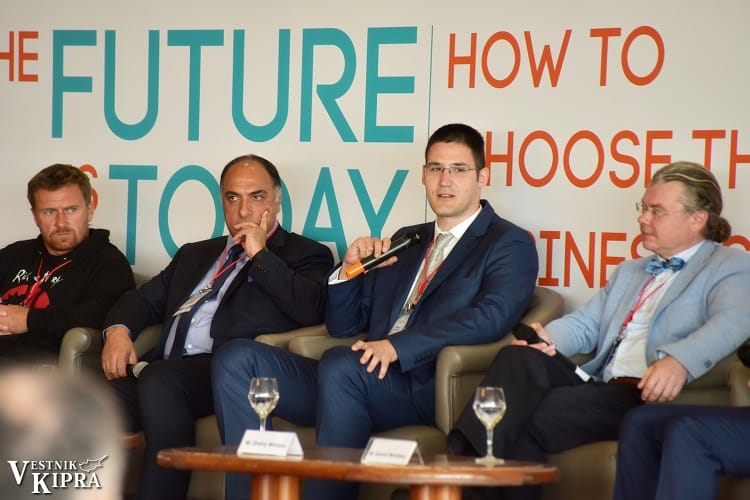 The conference “The Future is today” held in Limassol with the participation of distinguished speakers from Cyprus and abroad focused on the challenges and opportunities arising from technological revolution.

What was highlighted by the conference participants is the fact that Cyprus cannot remain uninvolved in the digital revolution.

More specifically, more than twenty experts analyzed the developments and the impact of the 4th Industrial Revolution and talked about challenges and opportunities in an ever-changing environment.

The Minister of Transport, Communications and Works, Vassiliki Anastasiadou, in her opening speech, noted that Cyprus cannot remain uninvolved in the digital revolution and that we must prepare ourselves in order to be at the forefront of innovation and modernization.

In her welcome speech the Minister of Transport said that economy and society are experiencing great changes, many of which are being boosted by new technologies and innovative practices in the operation of the market and of the companies themselves.

Investing in new technologies in an interdisciplinary way will bring synergies, profitability and productive benefits while the combination of the use of digital technologies with other emerging ones will bring new and innovative business models, will generate competition, jobs and growth.

According to Ms. Anastasiadou, Cyprus needs to be immediately disengaged from the traditional economy sectors and move to new areas which create added value and innovation, while at the same time it must upgrade its traditional industry products in order to achieve the utilization of its wealth and resources.

During the conference, there were reports and presentations on artificial intelligence and virtual reality, as well as on how these modern technological means can serve companies. Blockchain and Cloud technologies were specially mentioned.

Two thematic sessions in the form of round table were held in parallel conference rooms.

The first was about the “The Future of Fintech” for those who work in the finance, banking, legal and accounting sphere and debated if banks and financial institutions will survive the FinTech era.

Τhe second thematic session was about the “Future of Workspace and Business Relations” aimed at those who work in the service industry, including hospitality, property, education.

The debate focused on how we should communicate with our clients in the nearest future, and what we need to do to be ready to serve the needs of our clients in communication with humans but in the same time to reduce our expenses and use robots and machine instead of people.

Also, during the conference there was a contest between six startups which had the opportunity to present their innovative ideas. The special committee that was set up awarded to Capsule Skateboards the first prize, a prize including specific actions to promote the idea presented.

The pioneering conference titled “The Future is today” was attended by company executives, government officials and others. The Economic and Business magazine “Eurokerdos” and the Russian magazine “Successful Business” were the conference organizers.

Airlines must compensate for delays during wildcat strikes