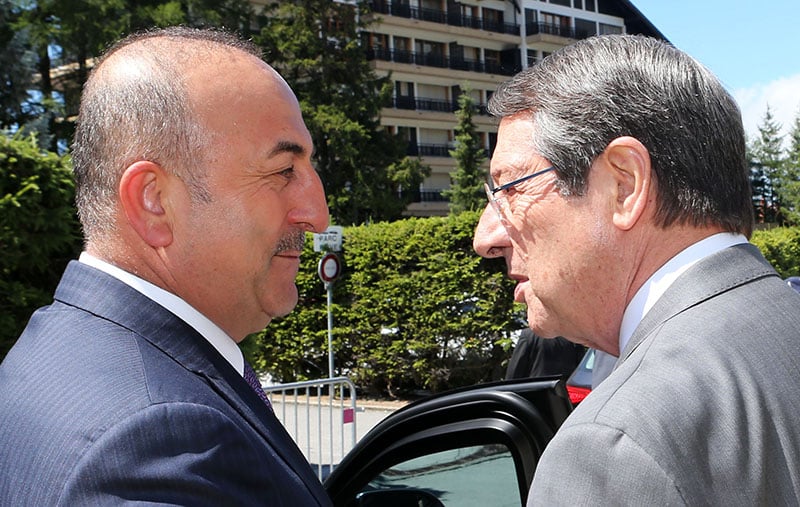 President Nicos Anastasdiades in Crans-Montana with the Turkish foreign minister

The European Commission on Tuesday urged Turkey to commit itself unequivocally to good neighbourly relations and the peaceful settlement of disputes, while the EU’s top official said the country if moving rapidly away from the path of European Union membership as Brussels delivered its harshest criticism yet of Ankara’s shift towards authoritarianism.

In its 2018 Report on Turkey, the Commission urged Turkey to avoid any kind of threat or action against a member state, or source of friction or actions that damage good neighbourly relations and the peaceful settlement of disputes.

The report follows recent violations of Cyprus’ exclusive economic zone by Turkish navy vessels that intercepted ENI’s Saipem 12000 drillship last February while it was en route to a site in offshore block 3 where it was scheduled to drill an exploratory gas well.

The report refers to Turkey’s expressed support for the talks on the Cyprus settlement and for the efforts of the UN Secretary-General and his Special Adviser.

“A Conference on Cyprus, convened in Geneva in January 2017 and in Crans-Montana in July 2017, closed without an agreement,” it said.

While couched in diplomatic language, the report blamed Ankara for a broad, collective and disproportionate crackdown following a failed 2016 coup attempt.

It warned that years of progress towards European Union standards in human rights, freedom of expression and the rule of law were being lost and that Turkey had seen a weakening of local democracy as presidential powers increased.

Turkey “continues to take huge strides away from the EU, in particular in the areas of rule of law and fundamental rights,” European Commissioner Johannes Hahn, who oversees EU membership bids, told a news conference after publishing the report.

“The Commission has repeatedly called on Turkey to reverse this negative trend as a matter of priority and makes very clear the recommendations on this in today’s report,” he said.

The report also called for Turkey to lift the state of emergency that allows President Tayyip Erdogan and the government to bypass parliament in passing new laws and to suspend rights and freedoms.

Turkey began talks to join the EU in 2005, 18 years after applying and while a series of issues, notably Cyprus and resistance to Turkish membership in Germany and France, slowed negotiations, membership talks have been stalled since 2016.

The report stressed that Turkey has still not fulfilled its obligation to ensure full and non-discriminatory implementation of the Additional Protocol to the Association Agreement and has not removed all obstacles to the free movement of goods, including restrictions on direct transport links with Cyprus.

“There was no progress on normalising bilateral relations with the Republic of Cyprus,” it said.

Negotiations, it said, will not be opened on eight chapters relating to Turkey’s restrictions regarding Cyprus and no chapter will be provisionally closed until the Commission confirms that Turkey has fully implemented the Additional Protocol to the Association Agreement.

It said that tensions in the Aegean Sea and Eastern Mediterranean were not conducive to good neighbourly relations and undermined regional stability and security.

“Bilateral relations with several EU Member States deteriorated, including at times offensive and unacceptable rhetoric,” it said, adding that in March 2018, the European Council strongly condemned Turkey’s continued illegal actions in the region.

Turkey, the report said, “needs to commit itself unequivocally to good neighbourly relations, international agreements, and to the peaceful settlement of disputes in accordance with the United Nations Charter, having recourse, if necessary, to the International Court of Justice”.

Israel hints it could hit Iran’s ‘air force’ in Syria