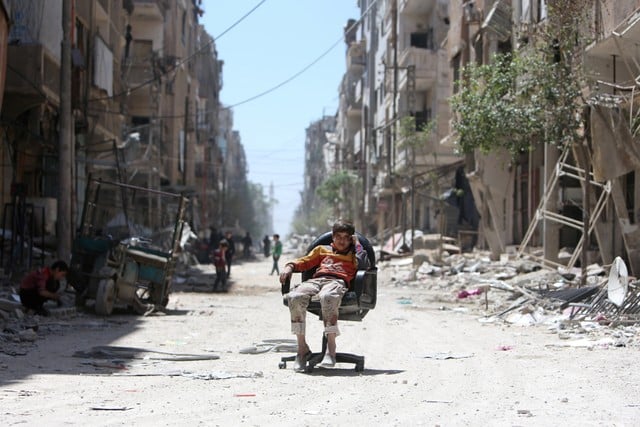 What has remained of the of Douma

Syrian anti-aircraft defences shot down missiles fired at the Syrian air base of Shayrat in Homs province late on Monday and another base northeast of the capital, Damascus, Syria’s state television and pro-Iranian Hezbollah media said.

State television showed pictures of a missile that was shot in the air above the air base only days after a U.S., British and French attack on Syrian targets in retaliation for a suspected chemical attack on the city of Douma on the outskirts of Damascus.

State television did not mention three missiles that were fired at Dumair military airport, northeast of Damascus, that pro-Iranian Hezbollah’s media service reported were intercepted by Syrian air defences.

Opposition sources say Dumair airport is a major air base used in a large-scale military campaign waged by the Syrian army with Russian firepower that regained eastern Ghouta, a rebel enclave on the outskirts of Damascus.

A Pentagon spokesman said there was no U.S. military activity in that area at this time.

Asked about the missile attack, an Israeli military spokesman said: “We don’t comment on such reports.”

Shayrat air base was targeted last year in a U.S. cruise missile attack in response to a chemical attack that killed at least 70 people, including children, on the rebel-held town of Khan Sheikhoun.

Israel has struck Syrian army locations many times in the course of the conflict, hitting convoys and bases of Iranian-backed militias that fight alongside Syrian President Bashar al- Assad’s forces.

Israel has long said Iran was expanding its influence in a belt of territory that stretches from the Iraqi border to the Lebanese border, where Israel says Iran supplies Hezbollah with arms.

Deputy Hezbollah leader Sheikh Naim Qassem told pro-Syrian government television channel al Maydeen he expected a reaction to the death of at least seven Iranian military personnel during a missile strike earlier this month on the T-4 airfield near Homs, which Iran blamed on Israel

“The deliberate Israeli slaying of Iranians in the T4 base will have a response but we don’t know its nature or its details,” Qassem said in the television interview.

The heavily armed and Tehran-backed Shi’ite movement has been a vital military ally of President Bashar al-Assad in the seven-year-old Syrian war.

Hezbollah, which last fought a major war with Israel in 2006, has however said it would not open a new front against its arch-foe from Lebanon.

Qassem said the powerful militia did not fight in all the main battles in Syria but was present in any area that was needed. He did not elaborate.

Israeli Prime Minister Benjamin Netanyahu said after the U.S., British, and French strikes in Syria his country will continue “to move against Iran in Syria.”

Turkey warns Greece after hoisting of flag on Aegean islet

President to meet with May ahead of Commonwealth Meeting