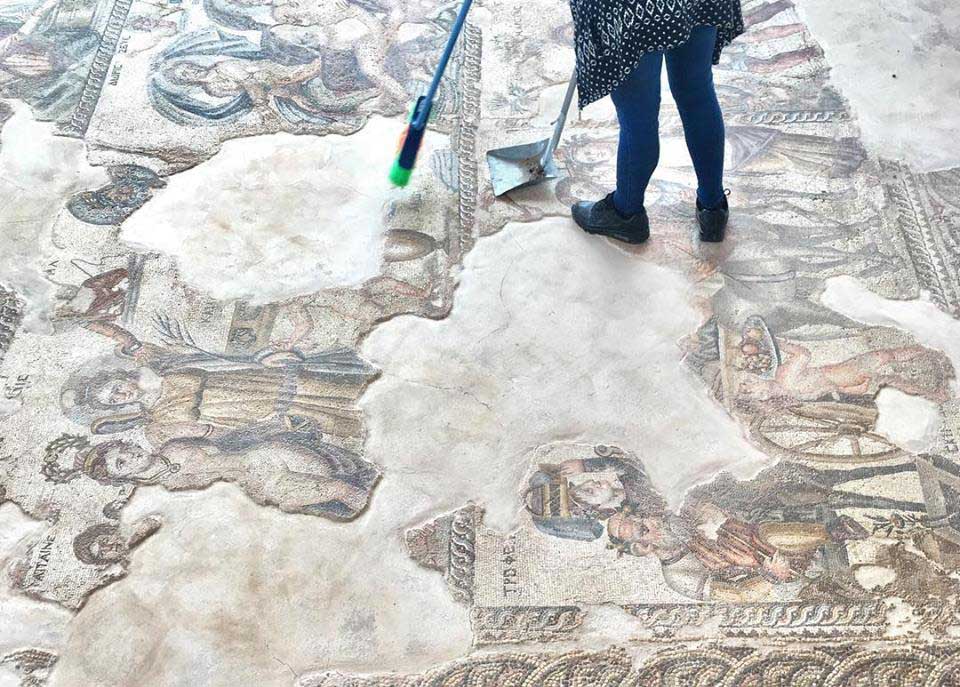 The Antiquities Department said on Wednesday that cleaning the delicate mosaics in Kato Paphos with a metal dust pan had been an ‘unfortunate event’ and contrary to instructions.

The department was forced on the defensive after a visitor to the Paphos Archaeological Park, which is home to a precious collection of Roman mosaics, posted a photo on his social media profile last week of a cleaner using a broom and a metal dust pan to sweep one of the mosaic floors of the Roman villas located at the site. The Kato Paphos archaeological site is a Unesco World Heritage Site.

The photo went viral and was accompanied by concerns over the cleaning and maintenance methods used by the Antiquities Department on such important pieces of cultural heritage.

On Wednesday, the department said that the mosaic floors were generally cleaned with a plastic broom and dust pan and always under supervision.

They are cleaned once a week to remove materials carried by the hundreds of visitors and suspended particles. It added that it is a standard practice for cleaning mosaics worldwide.

The use of a metal dust pan was “an isolated and unfortunate event and contrary to instructions given by the management”.

It said it took great care of the 250 mosaics on its archaeological sites and that the cleaning of all the mosaics is part of a maintenance programme which is based on intentional scientific methods and carried out by specially trained crews under the supervision of a specialised conservator.

It added that it “in no way ignored the important aspect of the preservation of the mosaics” of the archaeological site in question.

As regards the construction of overhead structures to protect the mosaics, the Antiquities Department said that, in cooperation with the Getty Conservation Institute of the US, it is carrying out a management plan for the Kato Paphos site and the Tombs of the Kings.

As part of this plan, it said, a workshop is to take place in September with the participation of international experts aiming at finding the best solutions for the protection of the mosaic floors.

Man United bounce back with win at Bournemouth