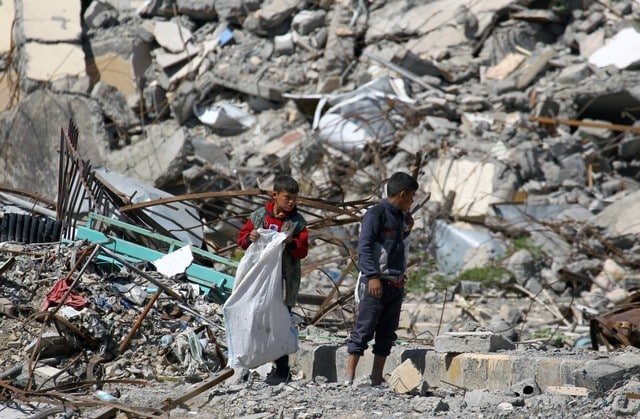 Boys stand on the rubble of damaged buildings in Raqqa, Syria

US assessments following the US, British and French missile strikes on Syria show they had only a limited impact on President Bashar al-Assad’s ability to carry out chemical weapons attacks, four US officials told Reuters.

The conclusion contrasts with the Trump administration’s assertion that the strikes on Saturday hit at the heart of Assad’s chemical weapons programme, language suggesting that Assad’s ability to stage more attacks had been dealt a devastating blow.

The United States, France and Britain destroyed three targets tied to Syria‘s weapons programme. The most important of them was the Barzah Research and Development Centre, which US intelligence concluded was involved in the production and testing of chemical and biological warfare technology.

But the US officials, who spoke on condition of anonymity, said the available intelligence indicated that Assad’s stock of chemicals and precursors was believed to be scattered far beyond the three targets.

Some of it, US and allied intelligence suggests, is stored in schools and civilian apartment buildings, which one of the officials referred to as “human shields.”

US Defence Secretary Jim Mattis, in remarks to Congress a day before the strikes, acknowledged that one of his top priorities in crafting the operation would be to minimise the loss of life to civilians.

Asked about the assertion that the strikes had only a limited impact, a White House National Security Council spokesman said the purpose of the military operation was to hold Syria‘s government accountable, degrade its capability and deter it from chemical attacks in the future – “all while minimising civilian casualties.”

A Pentagon spokesman referred Reuters to Mattis’ warning to Assad and his forces to “not perpetrate another chemical weapons attack for which they will be held accountable.”

Syria and Russia deny unleashing poison gas on April 7 during their offensive on Douma, which ended with the recapture of the town that had been the last rebel stronghold near the capital, Damascus. The suspected chemical attack triggered the US response.

‘AS GOOD AS IT NEEDS TO BE’

US officials said the assessment was that the strikes, particularly on Barzah, did degrade Syria‘s chemical weapons capability.

But the assessment also indicated that a large quantity of the chemical weapons was stored elsewhere and that Syria‘s chemical weapons programme, while crude, “is about as good as it needs to be for Assad’s purposes,” another official said.

For example, chlorine, which the United States assesses was used in the April 7 attack, is a common industrial chemical that is not difficult to find or weaponise, experts say.

Moved by the images of the civilian victims of the suspected chemical attack, US President Donald Trump made no secret he was convinced of the need for a muscular US response. He even put Assad’s backers, Moscow and Tehran, on edge with fiery rhetoric in the days before the strike that left open the possibility he might target them too.

But US officials familiar with US military planning said Russia and Iran were never seriously considered as targets.

Beyond working to avoid civilian casualties, Mattis and other US officials tailored the strikes in a way to avoid triggering retaliation from Moscow and Tehran.

The end result was an operation that did not target Assad’s conventional military infrastructure, including aircraft that could deliver chemical agents in the future.

Achna agrees to crocodile park but will rethink if residents disagree