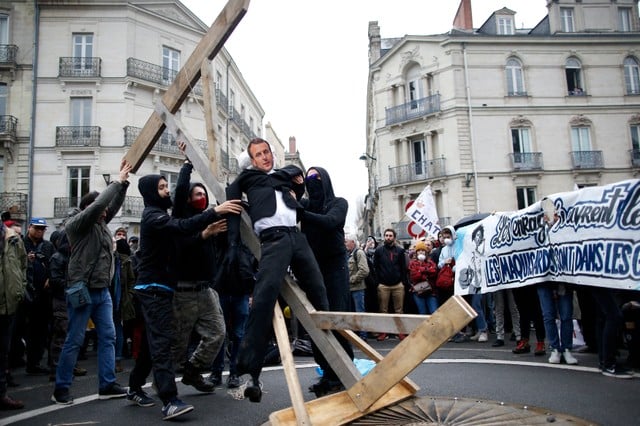 Chancellor Angela Merkel called for a spirit of compromise on reforming the eurozone at a meeting on Thursday with French President Emmanuel Macron, who pressed for solidarity among members of the currency union.

Before starting talks, the two leaders said they would present a united front at June’s meeting of European Union leaders on reforming the 19-member eurozone, which Merkel said they agreed was “not yet sufficiently crisis-proof”.

Their meeting took place against a backdrop of grumbling by lawmakers from Merkel’s conservative bloc, who are wary that Macron’s call for more solidarity in the eurozone could see German taxpayers’ money used to fund profligate member states.

“No monetary union can exist without elements of convergence,” the French leader told a news conference with Merkel in the German capital before their talks.

“The most important thing is not to react on such and such instrument at this stage, but to be sure that we share the same goals and to have a joint political objective,” he added.

Macron’s vision includes turning Europe’s existing bailout fund into a European Monetary Fund (EMF), to act as a buffer in any future financial crises in the bloc, which was nearly torn apart in a debt crisis that took hold in 2009.

He has also suggested the eurozone have its own finance minister and, at one point, floated the idea of a budget for the currency bloc worth hundreds of billions of euros.

Germany’s Social Democrats (SPD), Merkel’s junior coalition partner, sympathise with Macron’s call for solidarity. They want him to be rewarded for efforts to reform the French economy, well aware that a big chunk of French voters remain susceptible to far-right and far-left populists sceptical about the EU.

But Merkel’s larger conservative bloc insists on what they call the principle of ‘liability’, whereby individual member states carry responsibility for their own economic risks.

Stressing the need for compromise, Merkel said solidarity and liability must be linked: “We need debates, open debates, and in the end we also need the ability to compromise.”

France and Germany, which account for around 50 per cent of eurozone output, are essential to the reform drive. But while they often put on a strong show of political unity and shared intent, the devil is frequently in the detail.

Underlining a sense of urgency for reform among EU officials, European Commissioner for Economic and Financial Affairs Pierre Moscovici said time is running out for deepening the integration of the euro zone.

“We are some way from reaching a consensus on the priorities and method for moving the euro area forward, and time is running out,” Moscovici said in a speech at the Peterson Institute for International Economics in Washington.

“If the June Euro Summit fails to take the necessary decisions, I fear the momentum will be lost,” he said.