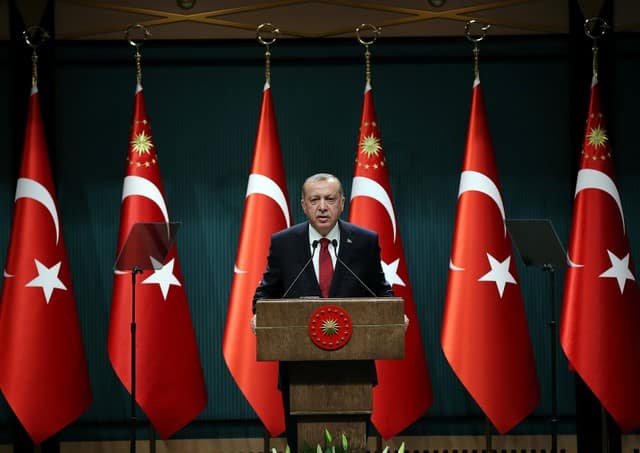 Turkey’s ruling AK Party taunted the main opposition party on Thursday to name a candidate to challenge Tayyip Erdogan for June elections which are expected to tighten the president’s 15-year hold on power.

Government spokesman Bekir Bozdag said the secularist opposition People’s Republican Party (CHP) was reluctant to put its leader, Kemal Kilicdaroglu, forward for the June 24 vote “because they do not believe he can compete with our president”.

Erdogan called the snap election on Wednesday, bringing the vote forward by more than a year so that Turkey can switch to the powerful new executive presidency that was narrowly approved in a divisive referendum last year.

While many people expected the presidential and parliamentary elections to be held early, the new date leaves barely two months for campaigning and may have wrong-footed Erdogan’s opponents.

“Our chief has donned his wrestling outfit, so if Mr Kilicdaroglu says ‘I’m a soldier’, then he should put on his wrestler’s tights and come out,” Bozdag said.

The CHP says it will decide on a candidate in the next 10 days, and the pro-Kurdish HDP said it would convene on Sunday to discuss its plans. The nationalist MHP party has said it is backing Erdogan.

Only former interior minister Meral Aksener, who broke away from the MHP last year to form the Good Party, has announced her plans to stand for the presidency.

“A politician does not run from elections,” Bozdag said, adding he believed Erdogan would win in the first round. “We as the AK Party are ready for elections”.

Since the Islamist-rooted AK Party first won a parliamentary election in November 2002, Erdogan has dominated Turkish politics, first as prime minister and then as president, transforming his poor, sprawling country on the eastern fringes of Europe into a major emerging market.

But Turkey’s rapid growth has been accompanied by increased authoritarianism, which critics at home and in Europe say has left the country lurching towards one-man rule.

Since an abortive military coup in July 2016, authorities have detained more than 160,000 people, the United Nations says. Nearly two years after the coup attempt Turkey is still ruled under a state of emergency, and the crackdown continues.

Defence Minister Nurettin Canikli said on Wednesday authorities had identified 3,000 armed forces personnel believed to be linked to the US-based cleric Ankara blames for the failed coup. He said they would be dismissed in the coming days.

Media outlets have also been shut down and scores of journalists have been jailed.

By calling the vote nearly a year and half early, Erdogan can capitalise on nationalist support for the military advances by Turkish troops in north Syria, where they drove out Kurdish YPG forces, said Goldman Sachs senior economist Erik Meyersson.

The tight schedule “also gives less time for the opposition to organise and choose presidential candidates,” Meyersson wrote in a research note.

The head of a Turkish polling company seen as close to the AK Party said a poll conducted this week had put the AKP on 41.5 per cent, with 6 per cent for its ally, the MHP.

Mehmet Ali Kulat, chairman of MAK Danismanlik, said that in a presidential election support for Erdogan could outstrip support for his party.

Erdogan’s announcement helped the lira, which has plumbed record lows this month on widening concern about double-digit inflation and the outlook for monetary policy, surge 2.2 per cent on Wednesday, its biggest one-day advance in a year. Turkish stocks also rose more than 2 per cent.

Economists said the lira rally reflected a belief that the quick timeline for the election reduced the prospect of extra stimulus to maintain economic growth ahead of the vote.

The economy expanded 7.4 per cent last year, fuelled by stimulus measures including tax changes and an increase in government credit support for small businesses. The government forecasts 5.5 per cent growth in 2018 though economists polled by Reuters expect more modest growth of 4.1 per cent.

On Thursday the lira eased slightly from Wednesday’s close to 4.030 lira to the dollar at 1026 GMT.

Wenger: Europa League is our priority

Achna agrees to crocodile park but will rethink if residents disagree