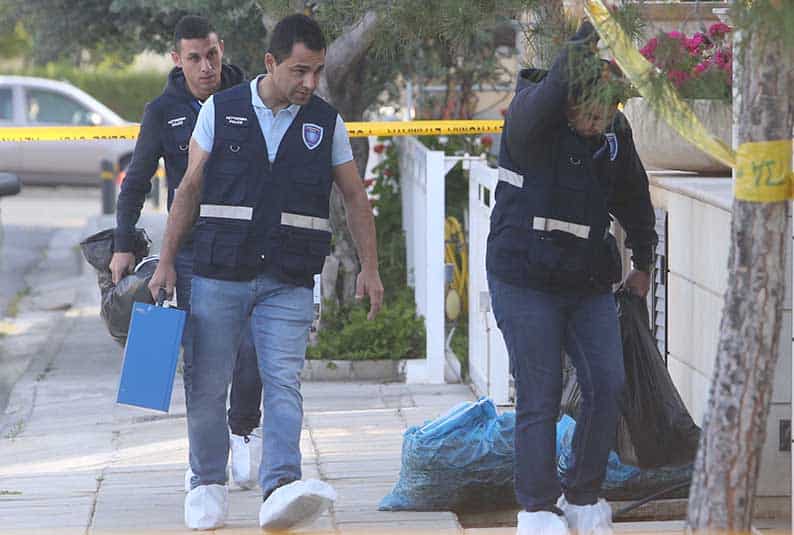 Police on Friday searched the area around a Nicosia house where a couple was brutally murdered the previous day and scoured through security camera footage but remained tight-lipped concerning the details of the investigation.

Police spokesman Andreas Angelides said they would make an announcement when they had something worth announcing.

“Investigations continue and everything is being assessed,” he said.

Cyprus woke on Thursday to news of the shocking crime in Strovolos where teacher Giorgos Hadjigeorgiou, 60, and his 59-year-old wife, Dina Sergiou, who worked for the Central Bank, were found in a pool of blood in their bedroom at around 1.30am, stabbed multiple times apparently while they slept.

A post-mortem found that Hadjigeorgiou had been stabbed 25 to 30 times while his wife suffered around 10 blows. They both had one defensive wound each on their right arms.

Police have yet to recover the murder weapon. On Friday, officers with dogs and metal detectors searched the area around the detached two-storey home.

Investigators have also collected footage from all the available security cameras in the area in a bid to find clues that will lead to the perpetrator or perpetrators.

Police believe the couple’s adopted son, 15, could be the key in breaking the case. The boy had not been questioned by police by early Friday afternoon.

The boy managed to flee, running to a neighbouring house. He claimed the perpetrators had forced entry into the house and told him they would not harm him.

Reports said they had locked him in a basement storage room but that he managed to open the door and ran outside to seek help from neighbours.

According to the daily Politis, the couple adopted their son in Russia in 2007 when he was three-years-old. The boy is reportedly staying with his paternal aunt.

Meanwhile, the personal data commissioner urged the media anew on Friday to refrain from publishing information targeting particular individuals before the authorities decided they were suspects.

Eleni Nicolaidou’s appeal comes a day after certain media outlets published information pertaining to the murder of a couple in Nicosia that they were later forced to withdraw.

The commissioner said those reports will be studied to determine whether they were in line with the basic principles of journalistic ethics.

Nicolaidou had issued a similar statement on Thursday.

“I understand that the mass media responded to the need or the public’s demand to be informed about this heinous crime, or even the eagerness to find and punish the perpetrator immediately,” the statement said. “The object of the statement was the protection of the child and not muzzling the mass media.”

Nicolaidou said some media complied immediately, others partially, and others, while showing an intention to comply at first, ended up publishing and reproducing information that did not serve journalistic interest properly.