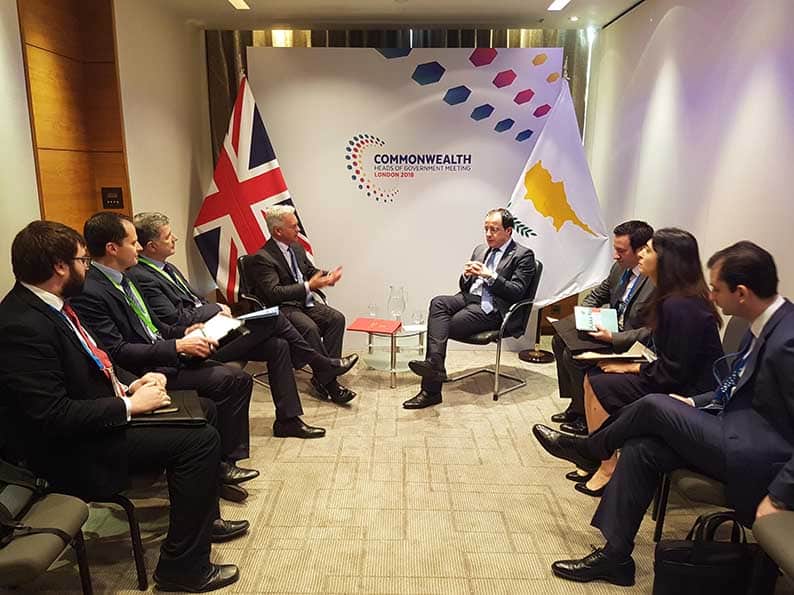 President Nicos Anastasiades told Commonwealth leaders on Friday how important it was for them to publicly express solidarity with Cyprus’ exercise of its sovereign rights.

In his address to the Commonwealth Heads of Government Meeting (CHOGM) final session in London, Anastasiades updated fellow leaders on Turkey’s illegal activities in the island’s exclusive economic zone.

Anastasiades expressed his gratitude for the member countries’ long-standing support for a Cyprus settlement and the inclusion of a paragraph on this issue in the CHOGM Final Communique.

“It is extremely important for us that the Commonwealth remains aware of this matter and continues to publicly express its solidarity with the Republic of Cyprus in its quest for reunification and lasting peace,” said Anastasiades.

“Of particular importance these days is the expression of solidarity in the exercise of the sovereign rights of the Republic of Cyprus in its exclusive economic zone under international law, including the United Nations Convention on the Law of the Sea. And this is because very recently the Republic of Cyprus faced escalated aggressive, illegal behaviour by Turkey in our exclusive economic zone. Turkey’s behaviour not only violates the Republic of Cyprus’s sovereign rights and is contrary to international law, including the UN Convention on the Law of the Sea, but also poses a broader security threat in the fragile area of the Eastern Mediterranean; it needs to be addressed as a severe infringement of the sovereign rights of a member state of the Commonwealth,” he added.

Anastasiades then thanked the summit for including the issue in the final communique and for expressing its support and solidarity.

Government spokesman Prodromos Prodromou said the communique expresses the Commonwealth leaders’ support for the sovereignty, the independence and the territorial integrity of the Republic of Cyprus, and also supports the efforts for a negotiated settlement of the Cyprus issue based on UN resolutions.

He also said that in the communique there is an appeal for respect for the UN Convention on the Law of the Sea, and a call to refrain from acts or statements or any other aggressive behaviour that threatens stability in the Eastern Mediterranean. Turkey was the target of this call, Prodromou said.

“Apart from the very important issues discussed at the Commonwealth summit, there is also the opportunity for meetings with a significant number of countries – as there are 53 members – either at heads of government or at foreign ministers level; countries with which there are no opportunities to hold meetings, either due to distance or because of the wider approach of our foreign policy, which naturally attributes greater importance on issues relating to the EU and the wider Easter Mediterranean region,” he said.

“So there was the opportunity for important bilateral meetings. There was a very interesting, open and frank discussion with the UK Minister for Europe,” he added, referring to Sir Alan Duncan.

“On one hand we had the opportunity to repeat, as the president had discussed with the UK prime minister, his readiness to resume talks; but at the same time to also discuss the role that the UK government can play in the effort.”

No statements after Turkish foreign minister visit to north