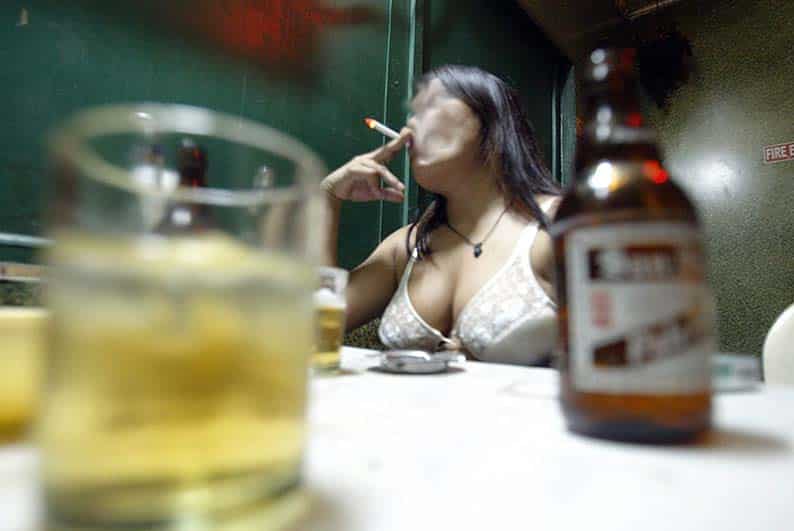 As a journalist visiting Cyprus, Anthony Patch had heard about the brothel-type bars in old Nicosia and felt compelled to investigate.

Bars where men go to meet women for sexual services are easily found in Nicosia, particularly in certain parts of the old town.

During the evening, the area is full of mostly young couples, but later on, when they all go home, and midnight turns into two and three in the morning, the bars there turn into an open ground for sex workers, pimps and drunk old men.

The windows were hardly transparent and it was nearly impossible to view inside, but as soon as my friend and I walked in through the wooden door it was clear that the average patron was well above fifty. The bar smelled of sweat, cigarette smoke and stale beer. The air was heavy and the smells strong. An older woman on the dance floor threw small bits of paper into the air as we made our way through the crowd.

When we made it to the bar I had two men either side of me. The bar maid – dressed in tight black – noticed us quickly and ordered us to move. We ended up in the far corner. It was a good distance from anyone else but provided an excellent view of the horror show.

A bald man a few rows down was playing with the hair of a young woman as her arms hung around his neck. Another man with grey matted hair and dark eyes was trying to kiss the neck of a darker skinned woman.

Another bar lady arrived quickly in front of us with a questioning look. She brought two beers and we drank them quickly. As soon as she noticed they had gone, she brought two more, telling us they were on the house. Moments later she was back with peanuts, sliced apples, crisps, olives, and hummus. It felt odd eating crisps and hummus in a dingy dive with groping going on in every direction.

We kept drinking beers at top speed and the barmaid kept promptly replacing the empty ones with free beers. This carried on for a while and I remember wondering naively why she was doing this. Later, I figured out it was obviously a method of keeping male patrons drinking and interested in the women.

Curiosity finally got the better of me and I got up to walk around. Behind me in a dimly lit part of the bar were three women sitting on the laps of three men who looked to be well beyond retirement age. An older fellow next to me at the bar – seeing me watching – looked over and said “those are nice Romanian girls – not expensive”.

It was now four in the morning and the place was lively. The dance floor was sticky as I made my way through the couples to two women sitting alone by the door. They invited me to sit. One of the ladies was Ukrainian, the other Moldovan.

The Moldovan woman asked if I wanted to sit alone at another table and I agreed. When she touched my hand, I could make out an obvious, poorly concealed cringe on her face. The attempt at intimacy was so forced and the touching so mechanical. The distance between her and real intimacy was probably so great that I wondered if she even knew how to feel anymore.

Then came the questions that as a journalist I felt compelled to ask. I wanted to know how arranging sex with a woman worked so I asked if she would be interested. I felt ashamed to be deceiving her: no integrity, no decency, just cheap and disguised questions, no better than the crazy eyed bald man. She invited me to go to the bar and buy drinks, explaining that the drinks would be rung through the till at an inflated price and that that would be how her services would be paid for.

She could probably sense the hesitation in my eyes. I told her I did not want to go through with it and asked for her number, thinking it wiser to speak about her life in a safer setting. She declined, and I then asked what was going to happen. She caught on. By refusing to pay I had made it clear that I was not a genuine client. She read straight through me – my cheap game was up.

“Nothing happens,” she said. “If you like, we go for coffee or shopping tomorrow and that is all.”
I brought the conversation to a close and made a weird and sudden exit from the table.

Back at the bar the ladies were bringing the beer rapidly again and I tried to talk to the other men sitting by. They seemed confused by my presence, but I pushed on and tried to get information from them. They explained that the women were mostly all from Eastern Europe. I asked whether men received the services in the bar itself but they explained that that was illegal and risky and that you had to pay to take them home.

By then my time was up. A bulky younger man approached me from behind. He asked forcefully who I was and although I tried pretending I was just some drunk tourist he continued to press me. While I tried to explain myself another man joined the circle. As I was sitting at the end of the bar I ended up in a strange caved off half circle with the two men in front of me and the wall behind. They eyed me up and down and said that I had to leave. No sign of my friend. Oh well, I’m leaving without him. But first I was told I had to pay my tab. Those free small bottles of beer had suddenly become five euros each. I did not argue, paid the bill and made it to the door.

As I was leaving I caught a final glimpse of the woman. She had a cigarette in hand with circles of smoke around her head. There was no colour in her face and no light or blue or green in her eyes. She looked down at the ashtray, and then her face drifted past me and over to the bar.