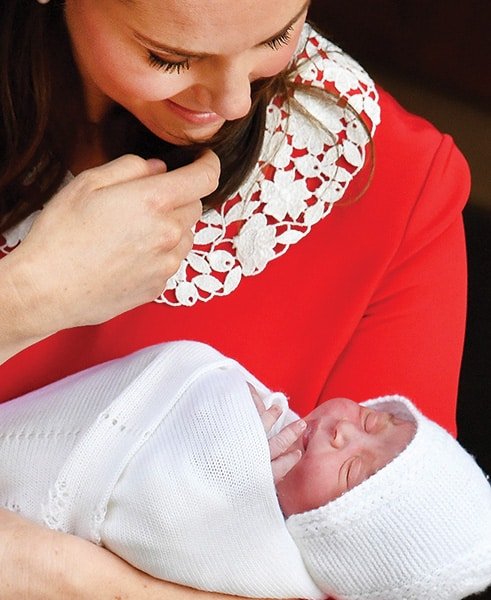 Britain's Catherine, The Duchess of Cambridge leaves the Lindo Wing at St Mary's Hospital with her newborn son in London

By Michael Holden and Guy Faulconbridge

Kate, wife of Prince William, smiled and waved as she left hospital on Monday after giving birth to a boy who is now fifth in line to the British throne.

The baby was born at 1001 GMT and weighed 8 lbs 7oz (3.8 kg). William was present for the birth at St Mary’s Hospital in west London where their other two children, George and Charlotte, were also born.

Kate, wearing a red dress, smiled at hundreds of well-wishers and assembled journalists as she left the hospital clutching her baby just 7 hours after the birth. William later put the boy, strapped into a car seat, into a waiting car.

“Thrice the worry now,” William told reporters, holding up three fingers with a smile, as he got into a Land Rover to take his wife and newborn back to Kensington Palace. “We didn’t keep you waiting too long this time.”

“Very happy, very excited, thank you,” he said. When asked about a name for the boy, William said: “You’ll find out sooner or later.” Bookmakers have made Albert, Arthur, Jack and Fred the favoured names for a boy.

Queen Elizabeth, Prince Charles, the baby’s grandfather, and other members of the royal family and Kate’s family have been informed and “are delighted with the news”, Kensington Palace said.

When William brought his children to see their brother, Princess Charlotte, 2, turned and waved at the gathering of well-wishers. George, 4, did not wave.

The baby is the queen’s sixth great-grandchild and is behind his grandfather and heir Prince Charles, father William, and siblings George and Charlotte in line to the throne.

A 2013 change to the law means that for the first time in British history, a new prince will not supplant his older sister in the order of succession. Previously younger males would take precedence over older female siblings.

The official announcement of the birth was made by placing a notice on an easel in the forecourt of the queen’s London home, Buckingham Palace, a tradition that has been in place since it became the sovereign’s official residence in 1837.

“My warmest congratulations to the Duke and Duchess of Cambridge on the birth of their baby boy,” Prime Minister Theresa May said. “I wish them great happiness for the future.”

William and Kate met as students at St Andrews University in Scotland. They wed in a pageant-packed ceremony at Westminster Abbey in April 2011 and are treated as global celebrities.

The couple now live at Kensington Palace and last year William gave up his day job as an air ambulance pilot to concentrate full-time on royal duties on behalf of his grandmother, having faced some criticism from British newspapers who dubbed him “workshy Wills”.

He has been determined to play a hands-on role in bringing up his children while also protecting their privacy, an issue close to his heart after the death of his mother, Princess Diana, in a 1997 Paris car crash as her limousine sped away from pursuing paparazzi.

“I think he takes on a lot more engagements than he used to,” said royal biographer Claudia Joseph.

“But compared to members of the general public who have full-time jobs, he still has some time off to look after the children, to give them their baths, to put them to bed and I think he’ll continue to do that,” Joseph said.

The British royals are rarely out of the media glare, but the baby arrives at a time when the Windsors have particularly been in the limelight.

On Saturday William joined the queen and other senior royals, with the exception of Kate, as the monarch celebrated her 92nd birthday at a televised concert.

The queen also played a prominent role at the Commonwealth Heads of Government meeting in London last week, where it was announced that Charles would succeed her as head of the network of mainly former British colonies.

While interest in their third child has been more muted than with the birth of their first, large numbers of photographers and broadcasters from around the globe massed outside the hospital, along with some dedicated royal fans.

“We’ve been coming out doing this for 21 years,” said John Loughrey, 63, from south London, who was wearing a Union Jack onesie and hat and holding a baby doll adorned with a crown. He said he had been camped outside the hospital for 15 days.

“We were here for George and Charlotte and we’ll be there for the royal wedding too,” he said, referring to Harry and Markle.

However, not everyone in Britain is so enamoured.

“Congratulations to William and Kate but it is a private matter and if people are happy for them then fine but I think the media should just move on and talk about something more important,” Graham Smith, chief executive officer of the anti-monarchist campaign group Republic, told Reuters.

“The monarchy is about births, deaths and marriages and these events remind us how this system works and highlights again the inequality of those born into royalty and those born into poverty.”

One consequence of the birth is that some existing members of the royal family are pushed to the periphery, and this has led to calls for the monarchy to be pared down.

“One of the problems all members of the royal family have is they start quite close to the throne and gradually as time goes on they go further and further away,” royal historian Hugo Vickers said.

“It’s very easy to talk about a bloated royal family but it’s not really fair because the queen has an enormous amount of requests of things to do and her family are there to support her.”

The birth also gives Kate’s own family another cause for celebration after it was reported by British media on Sunday that her sister Pippa, who is married to a wealthy financier, was pregnant with her first child.