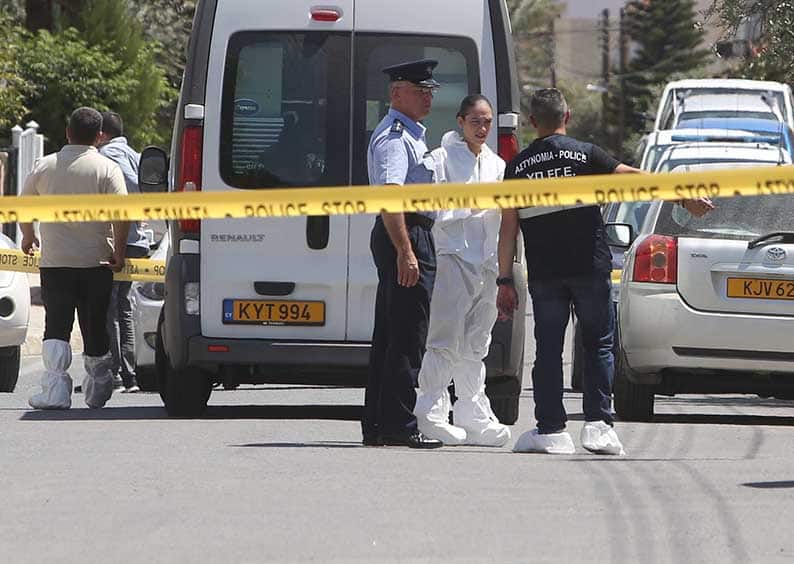 Police officers outside the home Andriani Vanezi, who was killed on Monday

Police on Monday said they are investigating pre-meditated murder after an elderly woman was found dead, bound and gagged in her bed in Aglandjia, Nicosia.

Andriani Vanezi, 80, was a retired school teacher and was living with her son. She was found at 9.05 am by her daughter who lives in the apartment next door, and who had gone to pick her up for a doctor’s appointment.

Police said that they went to the house where they located the 80-year-old gagged with duct tape and with her hands tied up.

Police spokesman Andreas Angelides had said earlier in the day that it was believed that the woman may have been a victim of robbery as all the rooms of her house were found turned upside down.

“It was ascertained that she was dead, and she was located by a family member who called the police,” Angelides said.

On Monday evening however, police said they were investigating pre-meditated murder, without providing further information.

According to state broadcaster CyBC, the last person who saw the woman alive before the killing is believed to be her son, as they had breakfast together before he left for work.

It is believed that the perpetrators entered the house between 7am, when the son left the house, and 9 am when the woman’s daughter arrived to take her to the doctor’s appointment. The woman’s arm was in a cast from an accident and she was to have it removed on Monday.

Reports said that the son told police that perpetrators stole €500 from a purse located in the room where Vanezi was found, and a laptop, belonging to him.

The body was examined at the scene by state pathologists Angeliki Papetta and Nicolas Charalambous.

Police have also collected footage from CCTV cameras on buildings in the area.

A neighbour told CyBC that he did not realise anything was wrong.

“At a quarter to ten a friend of mine came by and we went outside for a walk to the park, I came back at around 10 am and I saw all the (police) cars here. There was nothing here at a quarter to ten,” the man said.

The woman has cuts to her left hand and minor lesions on her face.

A post mortem is to be carried out on Tuesday.