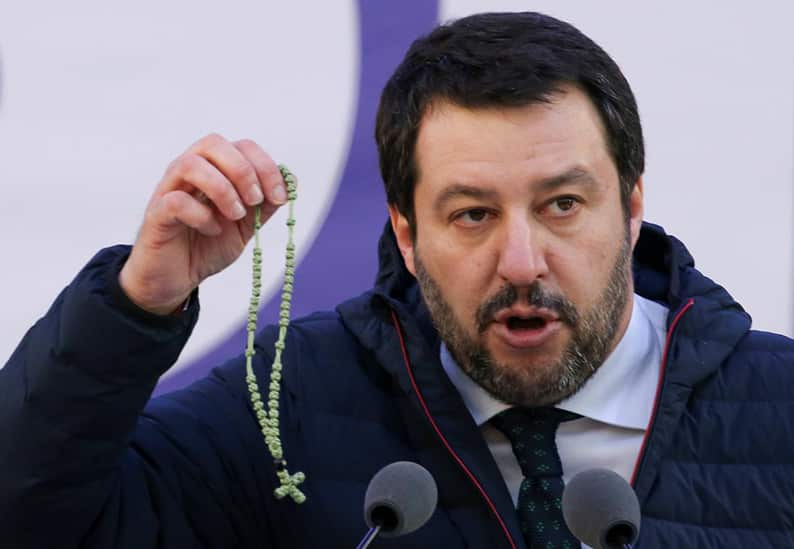 File photo: Italian Northern League leader Matteo Salvini shows a rosary as he speaks during a political rally in Milan

Italy’s president has asked the head of the lower house of parliament to see whether the 5-Star Movement and centre-left Democratic Party (PD) could form a coalition government, a presidential official said on Monday.

President Sergio Mattarella, who is struggling to end seven weeks of political deadlock following inconclusive elections last month, asked the lower house speaker Roberto Fico to report back to him on Thursday with his findings.

“I will start work immediately,” said Fico, who faces an almost impossible mission given fierce misgivings within the two camps about any possible tie-up.

Senate leader Elisabetta Casellati last week failed to broker a deal between 5-Star and an alliance of rightist parties after receiving a similar, highly focused mandate from the president, whose options are rapidly diminishing.

The bloc of conservative parties, including the far-right League, won the most seats at the March 4 vote, while the 5-Star emerged as the largest single party. Both fell well short of a parliamentary majority.

5-Star has said it is willing to work with the League, but not its allies, who include former prime minister Silvio Berlusconi. The League has so far rejected this demand, but continues to repeat its hope for a coalition deal.

The PD, which had governed Italy since 2013, lost heavily last month as voters snubbed it over the slow pace of economic recovery and over fears of rising immigrant numbers from Africa.

It has said repeatedly that it wants to move into opposition, but the party is divided and some of its leaders have said it should be open-minded about its old foe 5-Star.

Mattarella announced his latest effort to end the deadlock the day after the centre-right won local elections in the tiny southern region of Molise, giving the bloc a boost as jostling continues in Rome over coalition building.

“An important national signal has emerged from Molise. A united centre-right has the ability to win the backing of Italians to rule both the regions and the country,” Berlusconi said in a statement on Monday.

The centre-right candidate backed by nine parties won 43 percent of the vote in Molise, ahead of the candidate for the anti-establishment 5-Star Movement, with 38 percent.

The result was a setback for 5-Star, which had hoped to gain control of its first regional government after emerging as the largest party at the national ballot.

In Molise it was again by far the biggest party, with no other group reaching 10 percent, but it fell back markedly from the 44 percent it took in the same region in March.

If all efforts to break the Rome stalemate fail, Mattarella could try to put together a government of technocrats with a limited mandate, including electoral reform, to prepare for early elections in the spring of 2019.

Failing that, his last option would be to call elections in the autumn of this year.

Helector witness has ‘no idea’ about irregular waste invoices