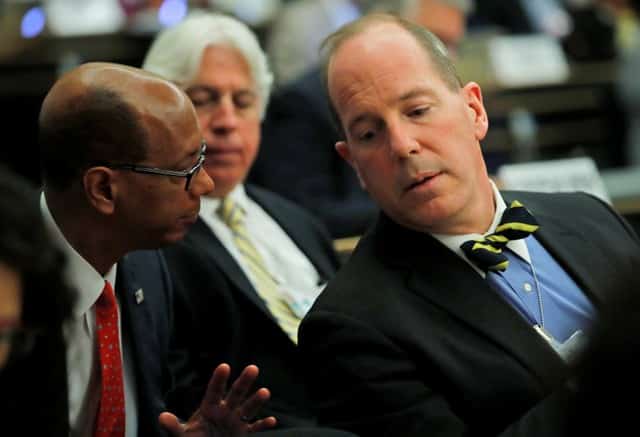 US Assistant Secretary for International Security Christopher A. Ford (R) listens to US Ambassador to the Conference on Disarmament Robert Wood during the 2nd Preparatory session of the 2020 Non Proliferation Treaty (NPT) Review Conference at the United Nations in Geneva

US allies and rivals spoke out in support of the Iran nuclear deal on Monday, bolstering French President Emmanuel Macron’s pitch to U. President Donald Trump that there was no “Plan B” for keeping a lid on Tehran’s atomic ambitions.

Macron is on something of a rescue mission for the 2015 Joint Comprehensive Plan of Action (JCPOA), which Trump has vowed to scrap unless European allies strengthen it by mid-May.

A nuclear non-proliferation conference in Geneva heard repeated calls for parties to the deal — the United States, China, Russia, Britain, France and Germany — to ensure its implementation and preservation.

“The Joint Comprehensive Plan of Action continues to be the best way to ensure the exclusively peaceful nature of Iran’s nuclear programme and to realise the promised tangible economic benefits for the Iranian people,” UN High representative for Disarmament Affairs Izumi Nakamitsu said.

“Iran (is) a country that for years illegally and secretly sought to develop nuclear weapons, suspended its weaponization work only when confronted by the potentially direst of consequences without ever coming clean about its illicit endeavours,” he said.

“For several more years (it) continued its efforts to enrich uranium in violation of legally-binding U.N. Security Council requirements, and retains the ability to position itself, several years hence, dangerously close to rapid weaponization.”

On a visit to Beijing, Russian Foreign Minister Sergei Lavrov said he had agreed with his Chinese counterpart to block any U.S. attempt to sabotage the deal.

“We are against revising these agreements, we consider it very counter productive to try to reduce to zero years of international work carried out via talks between the six major powers and Iran,” Lavrov said after talks with the Chinese government’s top diplomat, State Councillor Wang Yi.

“We will obstruct attempts to sabotage these agreements which were enshrined in a U.N. Security Council resolution,” Lavrov said.

Cornel Seruta, a senior official at the International Atomic Energy Agency, said the deal had significantly improved access to Iran.

“In short, Iran is now subject to the most robust nuclear verification regime and Iran is implementing its nuclear related commitments under the JCPOA,” he said. “It is essential thatIran continues to fully implement those commitments.”