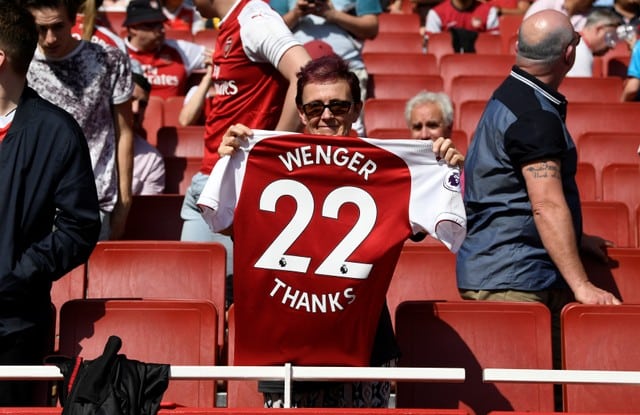 Arsene Wenger joked that the broad coverage of his impending departure as Arsenal manager made him feel as if he had already been to his own funeral – but he also expressed dismay at a perceived lack of unity among the club’s fans.

The Frenchman announced on Friday that he would be leaving Arsenal at the end of the season after nearly 22 years in the job.

“I am touched by all the praise I got from all English football, and I’m grateful for having had that experience in this country … where football is special, where the passion is special,” Wenger told reporters after a 4-1 Premier League win over West Ham United.

“I know that I will not get that any more in my life.”

Wenger suggested the coverage had felt something like an out-of-body experience.

“I had the feeling a little bit to assist live at my funeral because people speak about ‘how you were’ – so I don’t need to die any more,” he said, drawing a loud laugh at a packed news conference.

But after numerous poorly attended home games and a damaging run of losses away from the Emirates in 2018, Wenger also said he felt Arsenal’s fans in England held the club in lower esteem than their supporters around the world.

Wenger said he did not resent the fans but wanted them to focus their attention on the club and not on him – suggesting he may have been upset by the “Wenger out” signs that graced the stands with growing frequency in recent seasons.

“I do not want to make stupid headlines. I’m not resentful of our fans. I just feel if my personality is in the way of what I think our club is, for me that is more important than me,” he said.

Wenger’s relations with the club’s fan base have been increasingly rocky, particularly as Arsenal have failed to get beyond the Champions League last 16 since 2010 and failed to qualify for it altogether this season.

Their only route back into that competition next season is by winning the Europa League, where they face Atletico Madrid on Thursday at the Emirates in the semi-final first leg.

The 68-year-old Wenger refused to say whether he would take any more managing roles.

“At the minute I speak to you, I am too attached to this club to say yes to another club,” Wenger said.

“I cannot tell you much more because I don’t want you to come back to me and say in six months ‘You lied to us’ – I know I did that a few times – but I don’t want to be definite today.”

He would not be drawn on who Arsenal might pick as their next manager.

“My job is to take care of the team, the results and the finances and transfers. My job is not to select the next manager,” he said.

Britain to regulate young people’s use of social media

Police to decide when son of murder couple will testify (Updated)