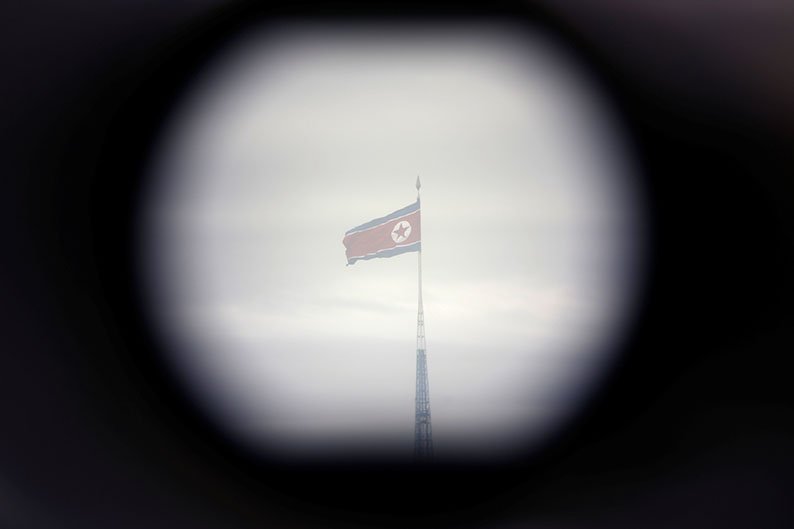 A North Korean flag fluttering on top of a 160-metre tower in North Korea's propaganda village of Gijungdong is seen through a pair of binoculars installed at the village hall of Tae Sung freedom village near the Military Demarcation Line (MDL), inside the demilitarised zone separating the two Koreas

For much of the last few decades, powerful speakers on the South Korean border have blasted propaganda to nearby North Koreans, everything from Korean pop songs to news about the number of cars in the affluent South. On Monday, they stopped – the latest step in a high-stakes diplomatic dance.

Coming before Friday’s North-South summit that will set the tone for a proposed meeting between North Korean leader Kim Jong Un and U.S. President Donald Trump, the move was more than just symbolic. Slowly and through painstaking negotiations, Washington and the two Koreas are sketching out a deal to avoid what all sides feared was an increasingly inevitable war.

How successful that will be – and whether Kim truly gives up his nuclear program – remains in question. Kim’s regime is fiercely paranoid about the outside world, long believing only military force – including nuclear – will truly safeguard it from external dangers. Its recent advances have seriously alarmed the United States, generating threats of military action – and only a titanic and remarkably shrewd effort by Seoul has kept diplomacy alive. Now, however, it may be bearing fruit.

On Saturday Pyongyang said it no longer needed nuclear or intercontinental ballistic missile tests because it had reached its weapons development goals. U.S. officials and experts don’t think the North can yet reliably strike the U.S. mainland, but suspect Kim’s worries over potential U.S. action may have prompted the climbdown. North Korea already has the ability to devastate its immediate neighborhood, and that may be seen as enough. Alternatively, the regime may just be buying time.

Even a pause in escalation would be a diplomatic win. As late as January, there were widespread expectations Pyongyang might use the Winter Olympics to stir up tensions, perhaps through conducting more weapons tests or interference such as a cyber attack. Throughout last year – which saw multiple nuclear and rocket tests, as well as the assassination of Kim’s half-brother in Malaysia – escalation seemed unstoppable. Since January, however, the government of South Korean President Moon Jae-In used first the Olympics, then the promise of future meetings, to foster simple but ongoing dialogue. North Korea has not conducted a single test since.

Friday’s Demilitarized Zone meeting between Kim and Moon will be a key precursor to the U.S.-North Korean summit, which could take place in a variety of locations including Mongolia or Switzerland. It will be the first time the two men have met, and only the third between leaders of North and South since an armistice halted the Korean War in 1953.

Turning that theoretically temporary cease-fire into a more formally agreed peace deal is one of the Moon government’s long-term goals. The administration must convince Pyongyang that neither Washington nor Seoul has short or long-term ambitions to bring down the Kim dynasty. That’s one of the reasons why stopping the loudspeaker broadcast – which openly encouraged North Korean soldiers to defect – is so important.

Ultimately, anything that makes Kim feel his brutal, dictatorial regime is safe may help bring peace, even as it makes many feel conflicted and uncomfortable. Some topics, however, are almost certainly off the table – particularly withdrawing U.S. troops from South Korea.

All sides remain on very different pages. On a visit to Seoul last year, Trump reportedly suggested South Korea drop its ambition for reunification as a way to mollify Pyongyang. For now, both North and South remain committed to that concept, although few believe either would consider the compromises necessary to bring together their incompatible political systems.

Nor would a unified Korea be acceptable to China, North Korea’s only treaty ally and a country central to handling the peninsula.

Most U.S. analysts believe that remains unlikely. Only a handful of countries have voluntarily given up nuclear programs and other weapons of mass destruction: South Africa, Iraq, Libya, and post-Soviet Ukraine, which signed a deal brokered by Britain and the United States to return nuclear weapons stationed on its soil to Russia. Of these, Iraq and Libya both saw governments ousted by U.S.-led military regime change, while Ukraine has been increasingly menaced and attacked by Moscow.

U.S. officials say they want to see significant demolition of North Korean nuclear facilities to offer significant sanctions relief. Still, Washington might settle for an end to further testing and weapons development, staving off the threat to the U.S. mainland. South Korea – already well within range of North Korean conventional artillery that U.S. analysts say could kill tens of thousands in hours – would likely take the same deal. Japan, also within striking distance, is much more cautious, a major topic in meetings between Trump and Prime Minister Shinzo Abe last week. Tokyo realizes it cannot veto the joint South Korean-U.S. diplomatic effort, one of the reasons it is now seeking its own direct dialogue with Pyongyang.

No side really trusts the other. These talks are a positive step, and make imminent war much less likely. If they unravel, however – which remains entirely possible – the result may be catastrophic.