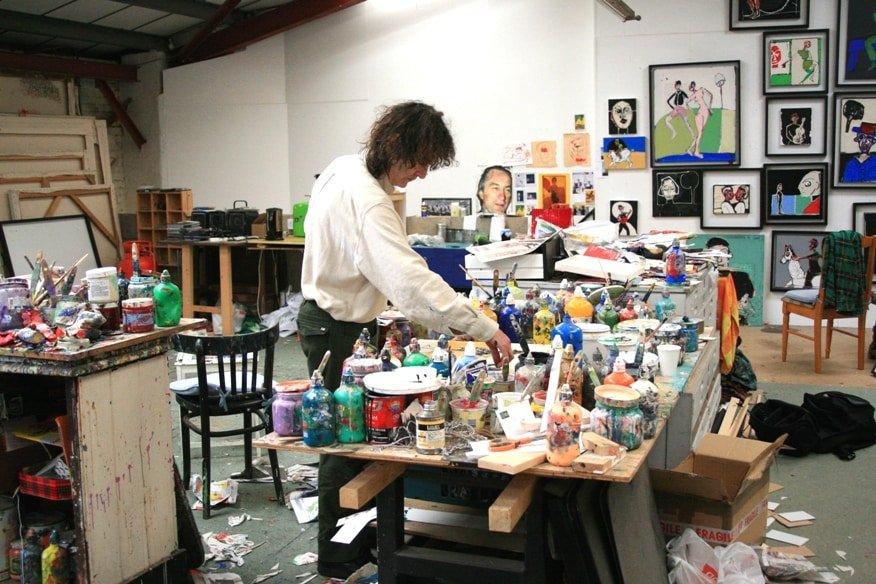 The works of celebrated British artist John Kiki, who originally hails from Cyprus, will continue to be exhibited under the name In the Artist’s Eye until the end of the month.

This latest exhibition was only planned to be on show until the end of March but after it wowed art lovers Gallery K in Nicosia decided to keep it going a little bit longer.

In the Artist’s Eye includes 30 etchings and six oil paintings by the artist whose works have been shown in galleries as prestigious as London’s Tate.

Themes are not immediate to Kiki, although he has been called a Mediterranean artist. They are immaterial to him, stories develop from his subconscious mind and it is only when the picture is finished that a narrative emerges, according to the artist.

“The only time I set a theme was the Carmina Burana series which was commissioned by Art Esprit Ltd. The idea was to explore the remarkable 12th century song and poem cycle. It involved a series of projects in the Concourse Gallery at the Barbican alongside a concert, films and a symposium in 1996-97.

“I worked closely from the original text. I loved the satire and the hyperbole in them, for example the idea in the translations that ‘the ladies of Babylon ate their children, which simply meant that they were hungry.’ Some of the works are currently exhibited at Gallery K in Nicosia.

Moving from theme to inspiration, the artist established both in America and Europe said inspiration is a struggle for him and he sees it as a fight for originality and a constant fight to avoid repetition and to invent new works. These new works, he said, aim to evolve a language of their own.

“Over the years I’ve built up lots of characters, men with hats, men with horses, dancers, running figures, mythological figures. These are repeating motifs in my work but I don’t identify with them as subjects. My heads are not portraits and my horses are not part of a narrative. They are shapes and colours. I can be moved by the shape of a form or the twist of a posing body but these gradually transform into (artistic) problems or possibilities pushing the painting until it is finally changed beyond recognition. I want my subjects to have their own reality.”

At the moment the artist is working on multiple paintings at the same time. He is creating new paintings and reworking paintings that he had considered finished. He returns to old paintings because for him art is a voyage of discovery and so paintings are always up for deconstructing and reconfiguring.

These reconfigured pieces of artwork may be exhibited in a large solo exhibition he wants to showcase next on our island. This big solo exhibition, as he puts it, is something that has been on his mind for years. He was born in the village of Eptakomi in Famagusta and, although his family moved to England, they always maintained a strong link with the island.

Kiki studied at London’s Camberwell School of Art under painter Frank Auerbach, who has been a lasting influence on his art. He then went on to attend the Royal Academy School and by the time of his graduation in 1967, the artist had developed a unique style, a fusion between figurative painting, abstraction and Pop Art. Apart from his commissioned work for Art Esprit, Kiki was the subject of a film, In the Artist’s Eye, a series made by Franco Rosso for BBC Television in 1989.