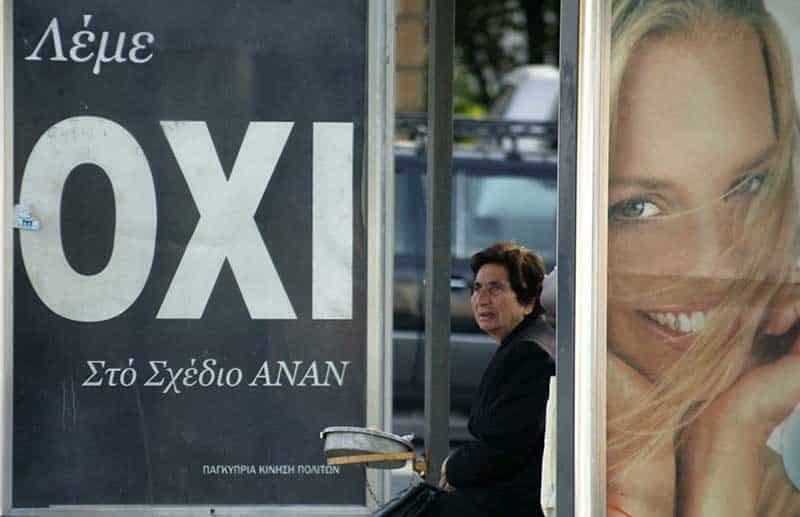 All the political parties of the so-called centre issued fire and brimstone announcements on Tuesday, the 14th anniversary of the referendum on the Annan plan which 76 per cent of Greek Cypriots voted against. It was an emphatic rejection of the only comprehensive settlement plan ever presented and in the 14 years that has elapsed since we have never again come so close to an agreement.

At the time, opponents of the Annan plan had promised we would secure a better deal as members of the EU that we joined a week later, some referring to it as a ‘European solution.’ Neither the then president Tassos Papadopoulos, who was in office for another four years, nor his two successors have come anywhere near delivering a ‘European solution’, conveniently blaming this failure to deliver on Turkish intransigence, the Cyprus problem exit route of all our politicians. It was also the reason given by President Anastasiades for the collapse of the peace process last year.

“Unfortunately, the concessions of President Anastasiades fed Turkey’s intransigence and turned it into impunity,” said the Greens’ announcement marking the referendum anniversary. “We note, unfortunately, the decision of the Cypriot people in 2004 was exploited,” it added. For Diko, the unfortunate thing was that “the rejection of the Annan plan by the sovereign people, was not respected.” The choices of governments since 2008 led the Cyprus problem to its “worst phase.”

Why is the Cyprus problem in a worse phase than it was in 2004 after the referendum? The talks are deadlocked as they were then and the status quo of 2004 remains unchanged. The Solidarity movement also believed that the “no of the Cypriot people to the partitionist Annan plan was not taken advantage of.” Nobody explained how the rejection of the Annan plan should have been taken advantage of or exploited. Would we be in a different position today, if the rejection was respected and exploited? It would be very interesting to hear in what position we actually would be, even if it is a theoretical question.