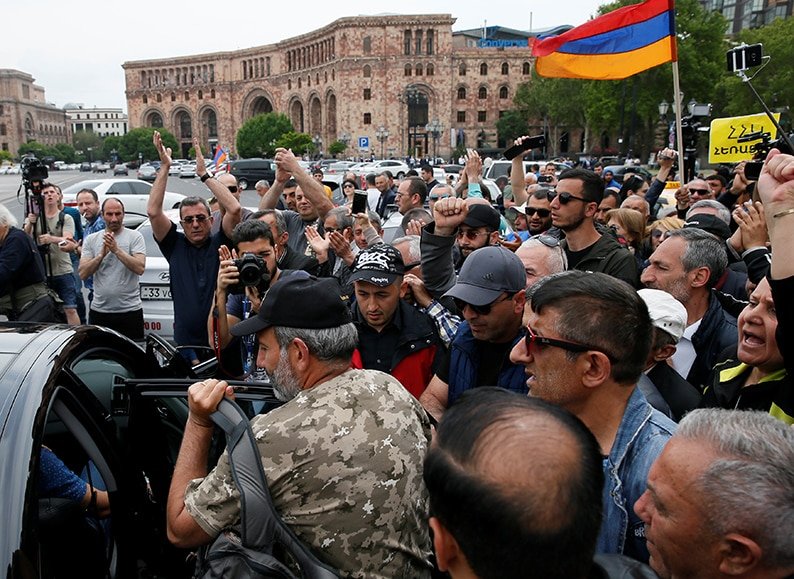 Armenia, a close ally of Russia, has been rocked by two weeks of anti-government protests against the ruling elite which led on Monday to the resignation of Serzh Sarksyan as prime minister. Sarksyan had previously been president for a decade.

The protesters have not stopped at Sarksyan’s resignation, making clear they consider the whole government tainted by his drive to shift power to the prime minister from the president.

“The acting prime minister considers taking part in ‘talks’ that have no chance of finding a solution to be useless,” Karapetyan’s press service said in a statement. Karapetyan is an ally of Sarksyan and a member of his ruling Republican Party.

Pashinyan, who has led the daily street protests, said Karapetyan was repeating Sarksyan’s mistakes and said the demonstrations would continue.

“The (ruling) Republican Party is seeking to deepen the crisis,” Pashinyan told a news conference.

Protesters plan to hold rallies outside the capital, in two other big cities, on Friday and Saturday and then to continue in Yerevan from Sunday.

Pashinyan, a former journalist turned lawmaker, said the opposition would probably boycott any snap parliamentary election unless parliament made him the interim prime minister.

“We want a guarantee that such an election would be really free, really transparent and really democratic,” Pashinyan said. “Otherwise this vote would not have any meaning.”

“I’m calling on the citizens of Armenia to go out to the streets from early morning on May 1 and to flood all streets and squares, including around the National Assembly (parliament),” Pashinyan added.

Parliament is due to pick a new prime minister on May 1.

Although the anti-government demonstrations have been peaceful, the upheaval has threatened to destabilise Armenia in a volatile region riven by the country’s decades-long, low-level conflict with neighbouring Azerbaijan.

Pashinyan has not questioned Armenia’s geopolitical alignment with Russia under Sarksyan and his criticism has focused on domestic issues such as corruption and poverty.

On Friday, the Kremlin said it hoped the political crisis in Armenia could be resolved as promptly as possible and with the consensus of all parties involved.

Moscow has two military bases in the ex-Soviet republic.

Russian President Vladimir Putin spoke on Thursday to Karapetyan, a former executive of Russian gas giant Gazprom, and made clear that Moscow was watching events closely and did not want mob rule in Armenia, the Kremlin said.

The Kremlin statement appeared to suggest that Putin wanted Armenia’s next prime minister to come from the ruling party, which has been the focus of popular anger, saying he thought the crisis needed to be addressed on the basis of what he said were legitimate parliamentary elections in 2017.

One Yerevan-based political analyst said the Kremlin had clearly endorsed Karapetyan as its preferred candidate to head the next government.

“It is a direct challenge to the opposition and a move to safeguard the position of the embattled and deeply unpopular ruling elite. It is also a flagrant rejection of the new political reality in Armenia,” Richard Giragosian, director at Yereban-based Regional Studies Centre, told Reuters

Nagorno-Karabakh, a mountainous part of Azerbaijan, is run by ethnic Armenians who declared independence during a conflict that broke out as the Soviet Union crumbled in 1991.

Petrolina: Collect for TITAN products and choose your destination