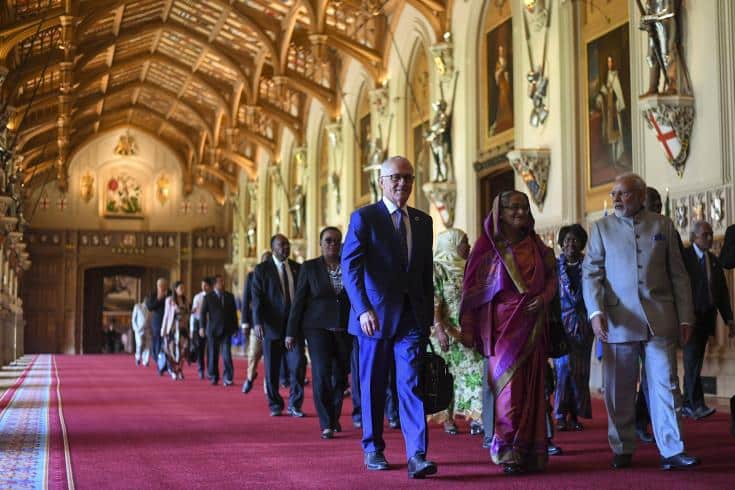 The potential role that Cyprus can play in the framework of the Commonwealth especially after the exit of Britain from the European Union, was highlighted on Thursday during the launch event of the Cyprus Branch of the Royal Commonwealth Society (RCS) in Nicosia, in the presence of Prince Michael of Kent.

Prince Michael spoke for a renewed opportunity for the Commonwealth after the recomposition within the EU, which presented an opportunity for Cyprus to play a bigger part in world affairs.

He focused on the business and investment opportunities that the Commonwealth has to offer and welcomed the new strategic partnership established between Commonwealth Enterprise and Investment Council and the Cyprus Investment and Promotion Agency in Nicosia.

He also pointed out that a Commonwealth free trade zone would grant access to some of the world’s fastest growing emerging markets giving a boost to business and investment, noting at the same time the importance of block to block partnerships enhancing trade opportunities between the Commonwealth and the EU.

Referring to the beneficial effect of the intra-commonwealth trade, he said that trade between commonwealth countries is on average 90% cheaper, including also services, as an export product, which as he said was one of the main pillars of the Cyprus economy.

Prince Michael also said that the recent update of the Cyprus-UK double taxation treaty is a development that would have a positive impact on bilateral economic growth.

He referred to the exchange of best practices within the Commonwealth, saying that Cyprus already benefits from such opportunity as it makes use of a Commonwealth device designed to strengthen public debt management.

“The modern Commonwealth offers tremendous opportunities for its member states. All we have to do is to unlock its huge potential”, he added.

Speaking in the event, President of the House of Representatives Demetris Syllouris said that the establishment of the RCS Cyprus Branch, just a year ago, is an indication of the keen interest shown by smaller Commonwealth countries in the region, in the significance of the RCS, as an important partner to the comprehensive participation in Commonwealth affairs.

“The launch event today, entitled” Opportunities and Challenges for Business and Investment in the Commonwealth”, to be presented by the keynote speaker, will give us further insights into the work of the RCS in this direction and, by extension, of the Commonwealth at large. At this point in time, this is invaluable, if one thinks of how our businesses can move forward regarding investments within the Commonwealth’s huge and often challenging spectrum”, he said.

In a speech on behalf of the Foreign Minister Nikos Christodoulides, Political Director of the Ministry of Foreign Affairs, Ambassador Rea Yiordamlis referred to the recent Commonwealth Heads of Government Meeting in London, which as she said, strongly reinforced the principles and values of the Commonwealth Charter.

As she said both President Anastasiades and the Minister of Foreign Affairs participated actively in the Summit and highlighted the important role of Cyprus as an EU and a Commonwealth member.

She also said that the Foreign Minister announced that Cyprus would offer its experience and expertise in the area of the sustainable development of aquaculture.

Cyprus, she added, also submitted to the EU a proposal for closer EU-Commonwealth relations to be discussed in the near future.
On his part President of the Cyprus Investment Promotion Agency, Michalis Michael, said that Cyprus could play an important role in enhancing cooperation and development within the Commonwealth platform. He added that business and investments was a part of these efforts.
“Economic cooperation can be the basis for strategic alliances and partnerships in a number of areas such as energy, technology and innovation, trade, financial services and many more”, he said.

In his speech Chairman of the Cyprus Branch of RCS Achilles Emilianides said that the decision of the UK to exit the EU was a catalyst for their initiative to form the Cypriot branch of the RCS.

He expressed the view that as shown to the recent Commonwealths Head of Government meeting there was a strong interest in reinvigorating the Commonwealth, something that was both timely and necessary.

As he said the current international turbulence needed powerful international organizations which were focusing on the founding principles of the Commonwealth.

Founded in 1868 the RCS is a network of individuals and organisations promoting the values of the modern Commonwealth, such as human rights, democracy and sustainable development. The Cyprus branch will be affiliated with the University of Nicosia.

Smiles mark start of summit between leaders of rival Koreas

F1 goes back to Baku, hoping for another thriller