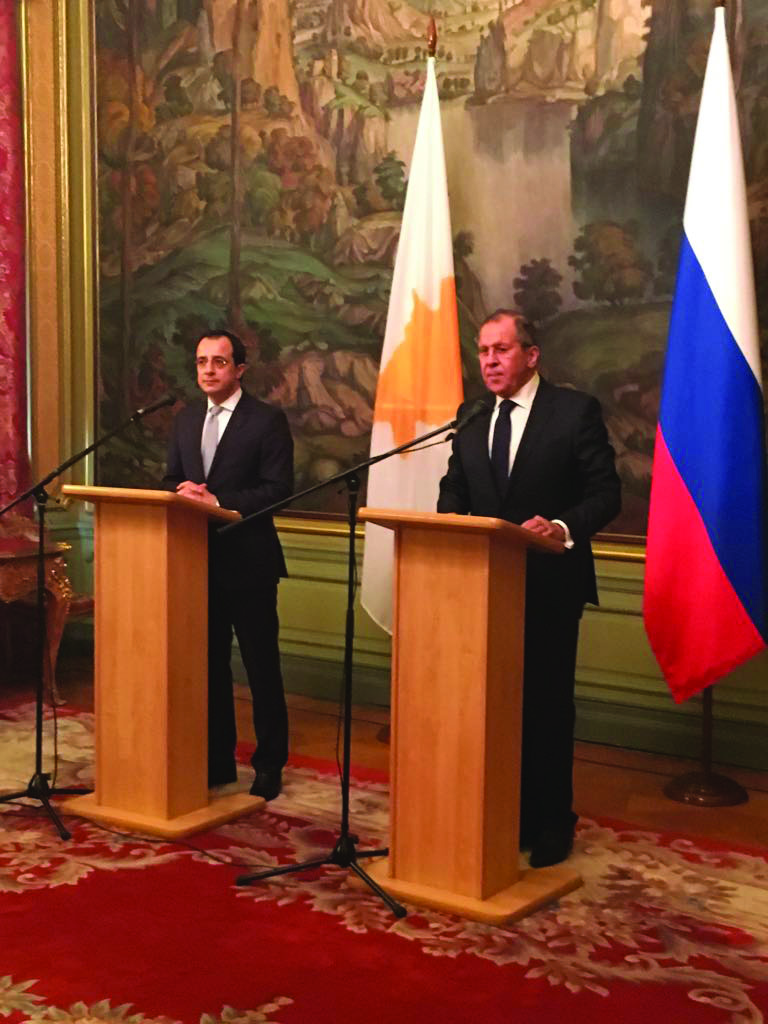 Russian Foreign Minister Sergey Lavrov on Friday said the guarantee system was anachronistic and inconsistent with the modern era, and Cyprus’ sovereignty and territorial integrity could be derived from the UN Security Council itself.

Lavrov was speaking after a meeting with his Cypriot counterpart Nicos Christodoulides in Moscow. The reference was to the fact that Turkey, along with Greece and the UK, has been a guarantor of Cyprus since 1960, and the fact that the last conference on Cyprus in Switzerland failed when the two sides could not agree a way forward on security and guarantees.

“We discussed the prospects for a resumption of peace talks and certainly we support a solution based on UN resolutions,” said Lavrov.

In an era where Russia has become a pariah in parts of the West due to alleged meddling in the US elections and Moscow’s role in Syria, Lavrov said Cyprus is an important partner of Russia in the Eastern Mediterranean.

He said the two countries have friendly relations in all fields and referred to a common desire to strengthen and increase trade relations. He added that between the two countries there is a constructive dialogue with regard to both international and European affairs.

According to an announcement from the presidential palace, the two men also discussed Turkey’s provocations in Cyprus’ exclusive economic zone, which Christodoulides said ‘violate every principle of international law, work negatively against prospects for a solution and undermine stability in the Eastern Mediterranean”.

Christodoulides expressed his appreciation for Russia’s stance that the 1960 guarantee system needed to be abolished, especially when the position came from one of the five permanent members of the UN Security Council, and suggested that due to Moscow’s good relations with Ankara at the moment it could help in the effort for the Cyprus talks to resume.

“Despite the problems and difficulties, we believe that the present state of affairs cannot be the solution of the Cyprus problem,” said Christodoulides.

“For us it is very important, especially at this juncture, with the information that some people are looking for other forms of a Cyprus solution.”

Speculation has been rife that Turkey plans to put permanent partition, or a two-state solution, on the table.

Christodoulides said it was clear from his talk with Lavrov that Russia only supports a solution based on international law and relevant United Nations resolutions.

He said he had a ‘frank and open dialogue’ with Lavrov and an exchange of views on bilateral relations, regional issues, and EU-Russia relations.

“Our bilateral relations, as clearly evidenced by the data, are at a very good level and beyond the review and evaluation, we had the opportunity today to discuss concrete ways to enhance prospects for further development,” Christodoulides said.