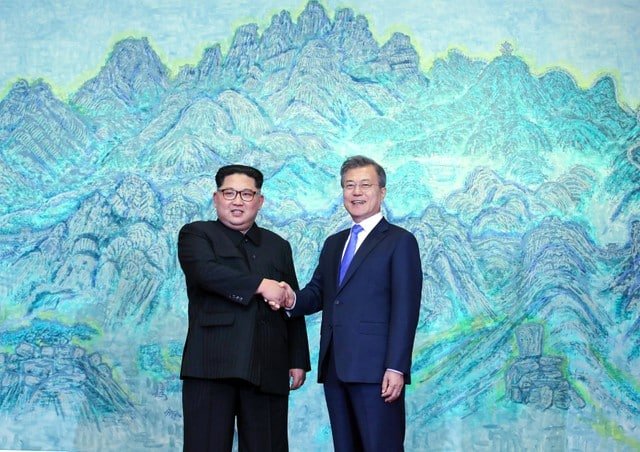 The golden doors on the stately North Korean building swung open and leader Kim Jong Un, in a black Mao suit and surrounded by a gaggle of officials, descended the steps toward the border.

Not since the 1950-53 Korean War had a North Korean leader set foot on South Korean soil.

With a smile, Kim stretched out his hand toward a waiting, and smiling, South Korean President Moon Jae-in, who stood between the squat, light blue buildings that straddle the border at Panmunjom.

The village is one of the few places where there are no high barbed wire fences or minefields between the two countries, separated by a conflict that ended with a truce, not a treaty, meaning they are still technically at war.

“I was excited to meet at this historic place and it is really moving that you came all the way to the demarcation line to greet me in person,” Kim said as he grasped Moon’s hand across the border.

“It was your big decision to make it here,” said Moon, dressed in a dark suit and light blue tie, who invited Kim to step over the line in the pavement, which he did.

That’s something Kim’s grandfather, the North Korean regime’s founding leader Kim Il Sung, or father Kim Jong Il, never did. The two previous summits between leaders of the Koreas, in 2000 and 2007, were in Pyongyang, the North’s capital.

Shaking hands again, Moon, 65, and Kim, 34, turned to face photographers on the North and then the South before Kim grabbed Moon’s hand and, in an unplanned move, invited him to step across the border into the North, where they stood face-to-face to talk a bit more.

Kim said he felt a “swirl of emotion” as he walked into South Korea, wondering “why it took so long” to get to this place, he told Moon later, at the start of their meeting.

The scene unfolded in simple, even run-down surroundings, where a concrete slab marks the border and paint is cracking on the low wooden huts.

The apparent warmth between the men was in stark contrast to the tension between the two countries last year amid North Korean weapons testing.

Since January, however, relations have improved, including having their Olympics sports teams march together under a common flag at February’s winter games in South Korea.

After being led along a red carpet by South Korean honour guard in traditional blue, yellow and red outfits, the two men entered the Peace House on the South side.

“The whole world is watching” our meeting amid high expectations, Moon said at the opening. “We have a lot on our shoulders.”

He said Kim’s crossing the border had transformed Panmunjom into a “sign of peace, not a sign of division”.

Kim responded with equal optimism, saying that “with determination, we will be heading toward a better place to make up for the lost 11 years” since the last summit.

At one point in their discussion, Kim said he heard Moon was “always waking up early” because of North Korea’s missile tests and promised not to interrupt his sleep anymore, senior presidential official Yoon Young-chan told reporters after the morning meeting.

Last weekend, North Korea declared it would stop all nuclear and missile testing because it had reached its weapons goals.

The two men went back to their separate sides for lunch, Kim riding a black limousine and escorted by a dozen bodyguards in dark suits and ties that jogged beside the vehicle.

They were to meet in the afternoon for more talks and planting a memorial tree.

Cyprus’ role in the Commonwealth, after Brexit