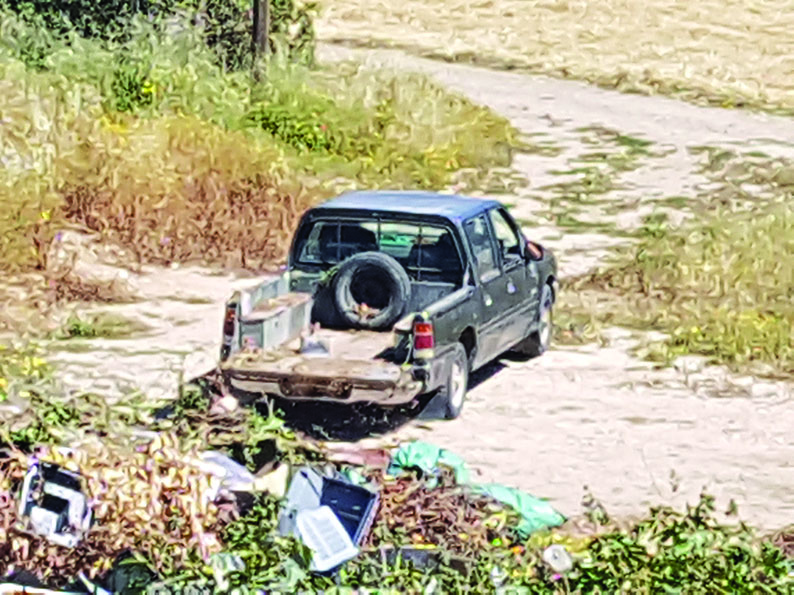 A truck dumping rubbish at the site

THERE is a serious problem with illegal fly-tipping in one of the main tourist areas of Paphos, according to residents and holidaymakers.

The practice has now got out of hand, posing a health hazard and also a fire risk as dry, hot weather approaches, say worried residents.

Pauline Puttock, 55, contacted the Cyprus Mail in desperation about garden waste, household items, furniture and tyres being regularly dumped on a piece of land adjacent to her Paphos apartment on the busy Tomb of the Kings road.

The British expat has lived in the apartment with her partner for the last eight years. The complex is also a popular holiday destination to many tourists. She said that all sorts of unwanted items appear at the site on a regular basis.

“The view from my balcony is terrible and it looks messy. It’s also very dangerous,” she said.

Puttock said rubbish is being piled up against a wall separating a piece of unused land from the Kings Gate complex, where she resides, and she is concerned that the ever-growing pile of waste, which includes cuttings from shrubs and trees and dry grass, could go up in flames at any moment.

The illegal rubbish dumping started last summer, but after placing calls to the municipality and appealing to the mayor, Puttock managed to get the rubbish removed two weeks later.

However, during the Christmas period, the dumping got underway again, and in the same spot next to her apartment, she said.

“This time it started as garden waste, but now there are also around 120 old television sets, beds, chairs, mattresses, tyres and other items.”

Puttock claimed that a nearby hotel has been undergoing renovation, and also suggested the cuttings and garden waste might come from a neighbouring complex.

Along with other residents of the Kings Gate complex, Puttock has emailed a number of complaints to the municipality over the last few months.

Although the resident has openly taken both video footage and photographs of people seemingly illegally dumping materials, of which they are aware, they continue to visit the site and offload any unwanted items, she said.

The rubbish tip is already putting holidaymakers off returning to the complex, as a neighbour told Puttock that some of their guests had said they were ‘not inclined to come back’, blaming the growing pile of rubbish.

Further along the busy road, which is home to many of the town’s hotels, apartments, restaurants, bars and cafes, guests at a newer complex are facing a similar problem.

Kate and Robert Barnes did not wish to name the complex they have been staying in, but said they would not return to the same place due to the uncleanliness of the area.

“Our view for our two-week holiday has been spoilt by a huge mountain of rubbish in the field in front of us which includes all sorts of furniture and shrubbery, as well as rubbish bags containing household waste, it stinks and we complained, but no-one seems that bothered.”

The couple said that although they will holiday in Paphos again, it will be in a different area.

“So much has been done to improve the town and a lot of money spent. It’s things like fly tipping and untidy and unkempt areas that let it all down,” they added.

Puttock agreed: “The mayor and the municipality are telling all of the business in the area to remove their awnings to try and tidy it up a bit, but I suggest they come and look at what’s going on down here, it’s disgraceful,” she said.

When contacted by the Cyprus Mail and informed about the illegal rubbish, the head of the municipality cleanliness department said he would forward the information with instructions to remove all of this waste to the authorised places immediately.

However, although this was carried out, Puttock said that almost immediately rubbish appeared at the site again.

“I fear this could be a futile case,” she said.

Our View: Anastasiades is wooing the opposition in the hopes of passing reforms