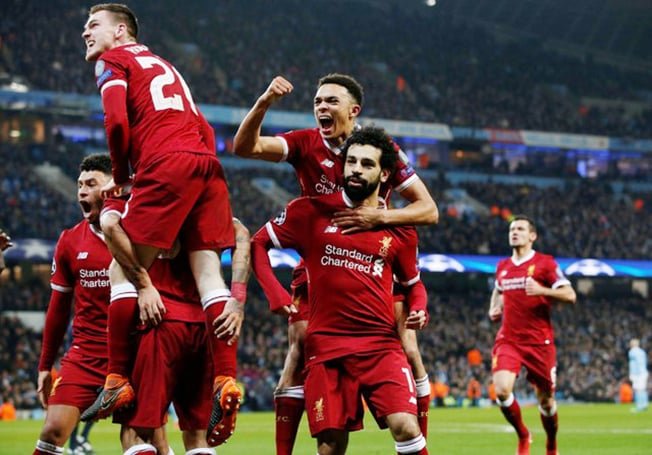 Liverpool, boosted by the brilliance of Mohamed Salah, will be hoping their defence stands firm after they conceded late goals in their last two matches against Roma and West Brom

Stoke City will hope that the Liverpool they face on Saturday is the team that wobbled alarmingly in the final 10 minutes of their Champions League semi-final against AS Roma, not the one that dismantled the Italians over the previous 80.

Nothing is ever clear with Juergen Klopp’s side who ended up kicking themselves after the whistle went at Anfield on Tuesday despite ending up the right side of a 5-2 first-leg scoreline.

Liverpool also conceded twice late on in their previous league game at West Bromwich Albion to prove that, no matter what magic Mohamed Salah provides, there is always hope against them if you hang in long enough.

Or, at least, that will probably be the gist of Stoke manager Paul Lambert’s team talk as he contemplates the daunting challenge of securing an away win in the battle against relegation.

Four points off safety with only three games remaining, Stoke could even go down if they lose and Swansea City beat Chelsea, who are still intent on denying Liverpool a top-four finish.

That should be motivation enough for Liverpool to ensure they do not slip up again although Klopp faces a tricky job in deciding his line-up after injuries reduced him to three fit midfielders.

Even that may not be too much of a problem, however, if Salah continues in his current form as he chases down the five goals required to beat Ian Rush’s club record of 47 goals in a season.

Champions Manchester City will also be in the mood for records at West Ham United on Sunday. City need just six more goals and two wins from their final four games to establish new Premier League scoring and points records, both of which look well within their grasp.

But, as one of 11 teams still scrapping to avoid relegation, West Ham have every incentive to put up a fight. The Hammers are six points above the drop zone, where Southampton sit just above Stoke and West Brom, who must beat Newcastle to stand any hope of survival.

Saints manager Mark Hughes has never experienced relegation as manager or player but, having also been in charge of Stoke this season, he could yet break his record by helping to take two teams down in one campaign.

Only victory will do on Saturday at home to neighbours Bournemouth, who probably need just a point to secure their own safety. Crystal Palace and Huddersfield Town look to have winnable games against Leicester City and Everton respectively while Brighton and Hove Albion travel to Burnley.

Time was when Manchester United v Arsenal at this time of the year would have been a title decider but on Sunday most interest will centre on whether Jose Mourinho pitches Alexis Sanchez against his former side as United seek to consolidate their hold on second place.

Tottenham Hotspur, who they beat in last week’s FA Cup semi-final, play Watford on Monday. Like Liverpool, Spurs must keep their momentum to hang on to a top-four position.