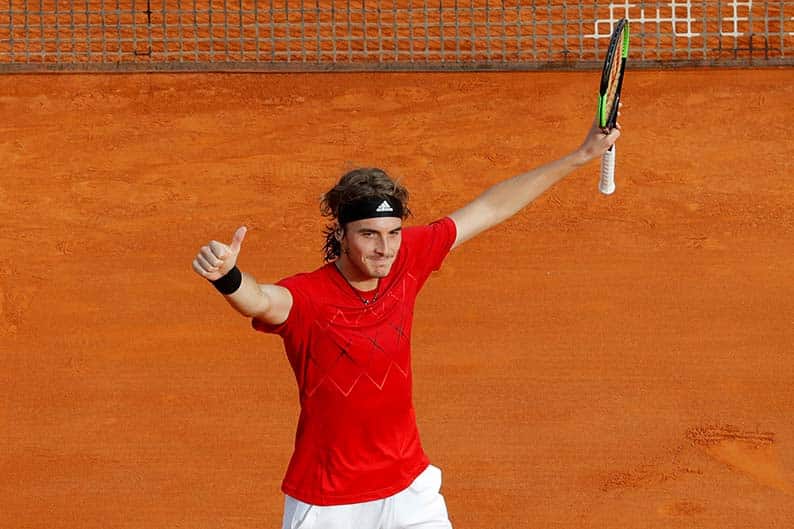 Stefanos Tsitsipas of Greece celebrates winning his first round match

RAFAEL Nadal booked a place in the Barcelona Open final by breezing past David Goffin 6-4 6-0 on Saturday with his 18th successive claycourt win and 400th overall on the surface.

World number one Nadal will meet Greek teenager Stefanos Tsitsipas in today’s showpiece when he will target a record-extending 11th title in Barcelona a week after claiming the Monte Carlo Masters for the 11th time.

Nadal has won every final he has played in Barcelona.

The Mallorcan got off to a slow start in the semi-final on the Rafael Nadal Court as he surrendered his service in the opening game and tenth-ranked Goffin held to take a 2-0 lead.

Nadal immediately broke back to level and the home favourite broke again in the 10th to take the first set.

The Spaniard came into his own in the second while Goffin, who had to play three sets against Roberto Bautista Agut in the last quarter-final on Friday, began to wilt.

The Belgian finally came out fighting in the sixth game but eventually succumbed to claycourt specialist Nadal, surrendering serve for the third time in the set by firing a shot beyond the baseline, ending a match lasting one hour 22 minutes.

Tsitsipas had pulled off the biggest win of his career on Friday before by stunning last year’s finalist and world number seven Dominic Thiem in straight sets and was the underdog against Carreno Busta, who is ranked 52 places above him.

The youngster got off to a flying start as he broke his opponent in the second game and marched into a 4-1 lead. The Spaniard hit back with a break to level at 5-5 but wasted a chance to break again and lost his serve to concede the set.

Tsitsipas, ranked 63rd, broke the 27-year-old for a third time to pull 4-2 ahead in the second and eventually served out the match, collapsing to the ground in elation as he won on his second match point when Carreno Busta hit beyond the baseline.

Tsitsipas becomes the first Greek player to reach an ATP final since 1973 when Nicholas Kalogeropoulos made the final of the now defunct Des Moines Open.