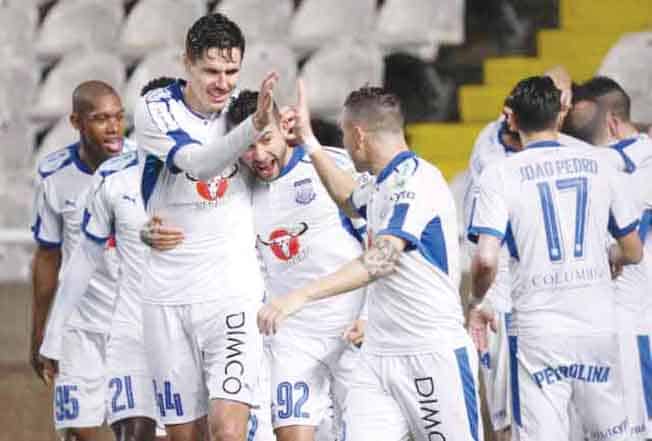 Leaders Apollon have a remarkable record at Apoel, having not lost at the GSP stadium in nine games, a record stretching back three years

Sunday’s league clash between Apoel and Apollon (7pm) has been dubbed ‘the final’ and rightly so as the team that sits at the top of the table on Sunday night will almost certainly be crowned champions, even though there will still be two more rounds to play.

Apollon hold the advantage over the incumbent champions as only a defeat will allow Apoel to leapfrog over them.

However, it is highly unlikely that Apollon will travel to Nicosia and park the bus looking for the point that will keep them two points ahead. Their record away to Apoel is remarkable as they have not lost at the GSP stadium in nine games, a record stretching back three years.

Fanourios Constantinou, Apollon’s spokesperson, was quick to highlight this incredible achievement saying “it will be very dangerous to change our philosophy and go for the draw. We have managed great results at the GSP and we shall be gunning for the three points.”

In their last visit earlier this year, Apollon battered Apoel 4-0 and have managed to score nine times against them this season.

Despite this their coach Sofronis Avgousti pointed out that every game is different and past results mean nothing. “We have played the best football so far this season, achieving excellent results but if we lose on Sunday, everything we have worked for the whole season will have been in vain,” he added.

Such is the belief amongst Apollon supporters that their team will complete a hat-rick of wins over Apoel and clinch this season’s title, that their ticket allocation (2,000+) was snapped up within hours of going on sale.

Avgousti has all players at his disposal for the big game.

His counterpart at Apoel, Bruno Baltazar, must have been pleased to see three of his wide players, Aloneftis, Oar and Efraim, returning to full training this week but it remains to be seen if any will feature in the starting line-up especially as they have been out of action for a lengthy period of time.

“I know it won’t be easy but we shall do everything possible to win in front of our fans,” Baltazar said earlier this week.

Apoel’s season has been badly hampered by a number of serious injuries to six key players, something that would have negated the chances of the championship for any other team. However Apoel, despite not performing well as a team, managed to stay within striking distance of the top thanks to the individual brilliance of players like Lorenzo Embizilio and Ghayas Zahid up front and Carlao’s calming influence in defence.

“We have the character and the mentality to win and we need to remain focused for the whole 90 minutes and show that we are the better team on the field,” Zahid said.

Apoel chiefs, realising the importance of a packed GSP, reduced the ticket price to just €5. More than 15,000 Apoel fans have booked their place for the showdown and, along with the Apollon fans, it will be the highest attendance of the season in the league.

The difficult task of officiating the game has been handed to Vassilis Demetriou.