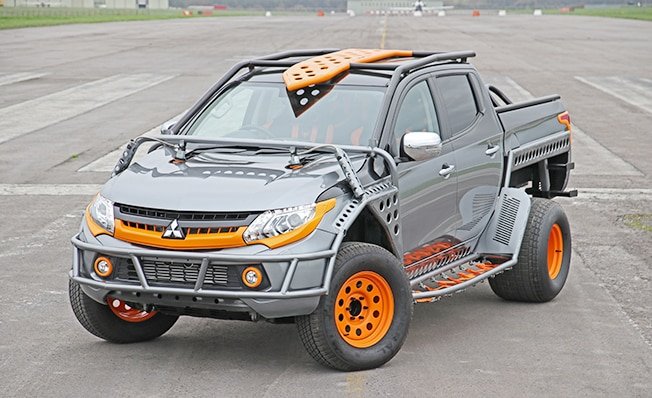 A unique Mitsubishi L200 has a starring role in the Fast & Furious Live arena tour after Mitsubishi Motors in the UK teamed up with Fast Live Productions and Shane Lynch, the renowned entertainer and racing driver who first found fame with the band Boyzone and who recently finished third in Celebrity Big Brother 2018.

The radical Mitsubishi L200 has been built in the style of the most extreme off-road vehicles to feature in the ground-breaking new arena tour. Mitsubishi Motors in the UK has taken inspiration from the build to create its latest special edition L200 SVP II which shares a similar colour scheme, picked out with orange detailing, and an aggressive stance augmented by wider wheel arches and bespoke orange and silver wheels.

As well as wowing audiences of the adrenaline-fuelled show as it tours the UK and Europe, the truck will be used by Mitsubishi Motors for its own shows, exhibition and driving events.

The unique truck strengthens the official partnership between Mitsubishi Motors and Fast & Furious Live, which saw standard Mitsubishi L200 models being used behind-the-scenes by the show’s production and promotion teams.

In keeping with the theme of the Fast & Furious movies and the live show, the Mitsubishi L200 has been radically reworked for maximum visual impact while also incorporating a host of performance enhancements.

To provide clearance for the Modular steel wheels – the rear ones measuring 15×15 inches – and the extended suspension travel, the L200’s double-cab bodyshell is encased by an external roll cage, which wraps around the wheel arches, front bumpers, and custom-fabricated, laser-cut metalwork. Beneath its much modified skin, the bespoke L200 runs an uprated version of the standard 2.4-litre turbodiesel engine.

Power has been boosted with the fitment of a hybrid Garrett turbocharger; custom side-exit exhaust and manifold; larger, front-mounted intercooler. There’s also an ECU remap to take advantage of the increased turbocharger size and the freer-flowing, 3D printed air intake and performance air filter.

Inside, it’s fully stripped with only the bare essentials remaining – a pair of Corbeau carbon fibre bucket seats and four-point Luke race harnesses.

The truck is one of three Mitsubishi vehicles that appear in Fast & Furious Live, including a special Mitsubishi Lancer Evolution which fans help create during a unique interactive segment of the show.

“Mitsubishi Motors in the UK and Shane have helped us to bring something very special to our live arena production,” said James Cooke-Priest, CEO, Fast Live Productions. “The truck sits perfectly alongside the incredible vehicles that have captivated viewers of the Fast & Furious franchise and is one for audiences to look out for in our adrenaline-packed production. We’re very grateful for the support of Mitsubishi in the arena and behind the scenes.”

On building the radical Mitsubishi L200, Shane Lynch said: “It’s been amazing to team up with two brands that really appreciate vehicles that are built to perform and also have the imagination to create a truck that’s completely unique. We’ve gone all-out on the build and the result is something which not only looks the part but has the power to match and starting with the Mitsubishi L200 gave us a tremendous base to work with.”

Toby Marshall, Sales & Marketing Director, Mitsubishi Motors in the UK, said: “We’re immensely proud to see one of our most popular models have a prominent role in what is a spectacular production and an absolute must for anyone with an interest in high-performance vehicles.

“We’re looking forward to seeing it in action and it’s another illustration of how the already impressive Mitsubishi L200 lends itself to the most extreme of conversions.”

Following the success of the global premiere at the O2 in London in January and a European tour, Fast & Furious Live now embarks on its return to UK cities in April and May. The show features precision performance driving and newly created physics-defying stunts.

Using favourite cars and locations that criss-cross the globe along with key scenes from the film series – created via state-of-the-art 3D projection mapping – fans will be transported straight into this immersive extension of the Fast & Furious movies.