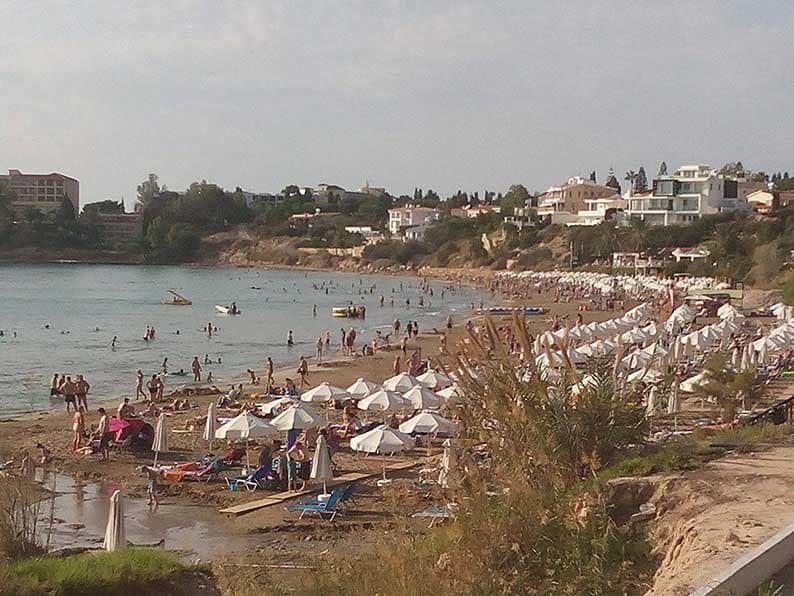 A stand-off between Peyia municipality and Leptos developers has left visitors to the popular blue-flagged Coral Bay beach without access to kiosks and forced to use stinking toilets.

The two kiosks selling food and drinks on the beach remain closed even though the tourist season has started, and the stench from the toilets, which are open but unable to pump away waste due to a lack of electricity, is overpowering.

Lifeguards on duty told the Sunday Mail that they had already received numerous negative comments from tourists on holiday, disappointed and angered that there are no facilities.

“The holidaymakers complain that nothing is open. It smells because the toilets don’t work properly. They come to the beach and pay for their beds and umbrellas for the day, but then there are no facilities, nothing at all. This is very bad for tourism, we feel ashamed,” one said.

Visitors to the beach are of all nationalities, although most are British. Thousands of tourists visit the 500m long beach every year, as it is regarded as one of the island’s best. It is also an important source of income for the municipality.

British tourist Joyce Newcombe, who has holidayed in Protaras before, said that her first visit to Paphos with husband John, has been a huge letdown. She said that international advertising regarding Coral Bay had been misleading. The smell from the toilets was disgusting and there were no facilities open to buy food or drink at all.

“We can’t even buy as much as a bottle of water. It’s a huge let down for us and we wouldn’t come here again, it’s nothing like the brochures. We will stick with Protaras next time,” she said

The lack of facilities is an unfortunate offshoot of a long-standing dispute between Leptos developers and Peyia municipality. Access to Coral Bay beach is currently across a piece of land owned by Leptos which plans to build a number of private villas and other structures on the plot.

Leptos also wants to operate both of the kiosk facilities for a five-year term, renewable for a further five years.

Peyia councillor Linda Leblanc said that the developer is ‘holding Peyia hostage’ to get something that they want.

“We can’t go to tender as we have to provide certain things with that, such as public access and electricity which we can’t. So another way is that the municipality handles it,” said Peyia councillor Linda Leblanc.

This is what happened last year. Kiosks were operated by the municipality but on a scaled-back basis, so as not to ‘rock the boat’ with the developer, she said.

However this year, no electricity has been supplied so far as ‘negotiations’ between the two parties are ongoing.

Leptos has said publicly that they plan to build a number of private villas and other structures on the plot.

But Leblanc said that checks made by the mayor of Peyia Marinos Lambrou confirmed that no official planning application has yet been made to develop the plot.

“Nothing has been filed as yet,” she said.

Last year Leptos confirmed that the developers are permitted by law to create tourist villas and apartments on the piece of land and that infrastructure would complement the area. The developers said that they want to create tidy, modern and contemporary facilities for beachgoers.

Leblanc said that Peyia council was willing to compromise with the developer on the issue of the operation of the kiosks if they could get public access to the beach cleared.

Last year the local authority even met with the auditor-general, Odysseas Michaelides, in Nicosia and discussed ways to try and accommodate the developer and the public without violating the law, as Leptos had wanted certain terms which were not possible.

Marathon talks between the mayor and the developer were ongoing this week, with the aim of finally resolving the issues, which include the supply of electricity. All previous attempts have broken down.

“This is all tied up with access to the beach and the long-standing issue of title deeds for hundreds of properties in the area, which are owned by Harbour Shore estates, a company acquired by Leptos almost twenty years ago,” she said.

“Here we are again at the end of April with no kiosks open and toilets not working properly, it’s ridiculous and locals and holidaymakers deserve far better treatment.”

A last ditch attempt by the mayor to resolve the issue will see him again meet with Leptos again on Sunday afternoon after Friday’s meeting proved fruitless.

Our View: Waste management fiasco could have been avoided