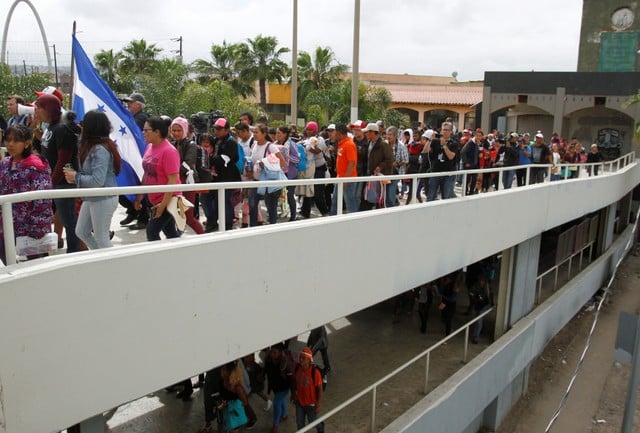 Members of a caravan of migrants from Central America walk towards the United States border and customs facility, where they are expected to apply for asylum, in Tijuana, Mexico

About 50 people from a Central American migrant caravan including women, children and transgender individuals tried to seek US asylum on Sunday but were not allowed to cross the Mexico border because officials said the facility was full.

Wearing white arm-bands to distinguish themselves from others crossing at the San Ysidro checkpoint near San Diego, some of the asylum seekers waved good-bye to family members who made a difficult decision to stay behind in Mexico.

About 20 people in the group were able to reach the final fence at the busy crossing, where they were watched by armed US border guards who did not immediately open the gate.

“We have reached capacity at the San Ysidro port of entry,” said Customs and Border Patrol (CBP) Commissioner Kevin McAleenan in a statement on Sunday, adding that the immigrants “may need to wait in Mexico.”

It was not immediately clear whether the group would be turned back or allowed in later. By sunset the tired migrants had decided to hunker down there, apparently with no bedding beyond the scant possessions they had with them.

“We’ve been waiting so long that it doesn’t really matter whether it’s today, tomorrow or when they let us in,” said Irineo Mujica, director of Pueblo Sin Fronteras, an advocacy group that organised the caravan since its starting point in southern Mexico a month ago.

At one point in early April the caravan gathered 1,500 immigrants from Honduras, Guatemala and El Salvador. It has drawn the wrath of President Donald Trump, who ordered immigration officials to be zealous in enforcing rules to stop unlawful entry by caravan members.

More migrants from the caravan, which numbered around 400 people by the time it reached Tijuana, also planned to seek asylum. About 100 set up an open air camp in a small square on the Mexican side by the San Ysidro pedestrian bridge, saying they would stay there until they were allowed through.

With no shelter, they laid out towels and blankets on the cold concrete.

The mood was somber following a grueling 2,000-mile (3,200-km) trek to the border. US immigration lawyers had warned the migrants of the low odds for winning asylum and the likelihood of detention, separation from relatives and deportation.

“I’m nervous. I’m afraid,” said Linda Sonigo, 40, walking solemnly towards the US gate with her two-year-old granddaughter in her arms. “I’m afraid they’ll separate us,” she said, motioning to her two children and grandchild.

US officials do not usually separate children from parents seeking asylum, although immigration advocates have reported instances of it happening. Families often spend less time in detention than other groups.

After US border officials said the check point was full, organisers of the caravan put forward what they called the “most vulnerable cases” to cross the border first, including children under threat and transgender people who say they face persecution in Central America.

Sonigo said her family was fleeing gang violence in El Salvador. Others in the group who decided their cases were not strong enough to have a good shot at asylum tearfully said farewell to relatives they may not see again for years.

Asylum seekers must demonstrate a well-founded fear of persecution at home, and the overwhelming majority of those from Central America are denied refuge in the United States.

After making a claim, asylum seekers are usually kept in detention centers. Women with young children generally spend less time locked up and are released to await their hearings.

Those denied asylum are generally deported to their home countries.

Death threats from local gangs, the murder of family members, retaliatory rape and political persecution prompted members of the caravan to flee, members of the group have told Reuters.

McAleenan said the border patrol would communicate with Mexican authorities about capacity at San Ysidro, a move reminiscent of an ad hoc system created to manage an influx of Haitians two years ago, when the US border agency set daily quotas for immigration interviews.

US Secretary of Homeland Security Kirstjen Nielsen said earlier this week that the caravan migrants should seek asylum in Mexico.

US border authorities said Saturday that some people associated with the caravan had already been caught trying to slip through the fence and encouraged the rest to report to authorities.