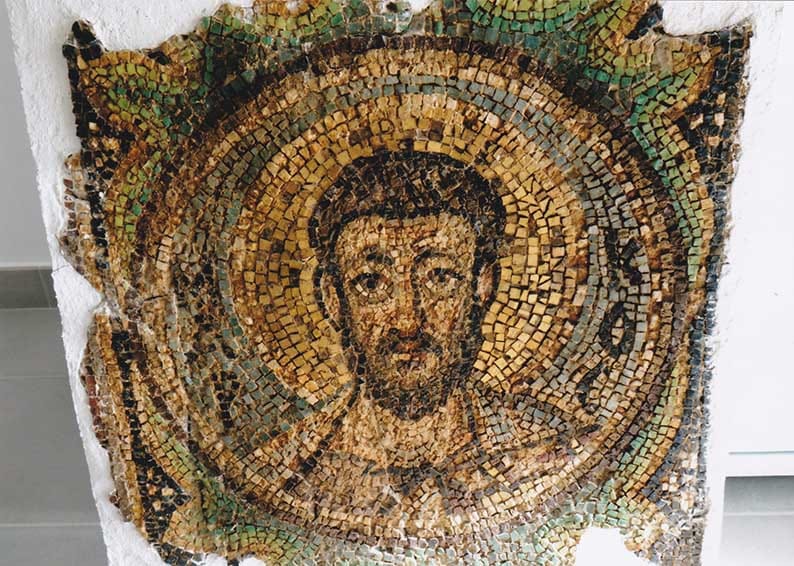 The mosaic of Saint Mark, one of the few remaining pieces which have yet to be repatriated

The mosaic depicting Apostle Mark and a fragment of another showing a depiction of Christ from the church of Kanakaria have been located, according to The Walk of Truth, a non-profit organisation which has called on the authorities to work towards having the last mosaic fragments from the church included in Interpol’s list of stolen artworks.

Announcing the find, Walk of Truth and Cultural Crime Watchers Worldwide welcomed the repatriation last week of the mosaic fragment depicting the Apostle Andreas, also originating from the sixth century Church of Panayia Kanakaria in Lythrangomi in the north.

The Kanakaria mosaics were stolen and sold by Turkish antiquities’ smuggler, Aydin Dikmen, in the wake of the 1974 Turkish invasion. The Apostle Andreas and Apostle Mark pieces are said to be the last fragments of the mosaics to be accounted for.

The foundation said that collectors who have pieces of the mosaic should not be given money for their return “because the publicity over the looting of the church and its mosaics, brutally removed and sold abroad, has been extensive worldwide”.

A symbolic amount was given to the collector of the Apostle Andreas piece.
The network of volunteers and experts that make up Walk of Truth, including foreign police officers has helped locate earlier mosaics from the same church but both the church and the government of Cyprus were opposed to paying money for their repatriation, something with which the foundation said it completely agrees with.

Walk of Truth founder, Tasoula Hadjitofi, said it was sad that Cyprus had had to pay, albeit an unspecified symbolic amount, for the return of the Apostle Andreas fragment. But she added that if the church had changed its policy, and paying money for the repatriation of stolen treasures was now “a designated practice, then the Walk of Truth was in position to contribute to the repatriation of the mosaic depicting the Apostle Mark as the owner-collector abroad refuses to deliver it without being paid a symbolic amount of money”.

According to the foundation, the mosaic fragment showing part of Christ’s depiction (lower part) from the same church, has been immured into a wall in the house of a person abroad, who is now in prison for murder.

“The competent state authorities should work towards having the last mosaic fragments from the Church of Kanakaria included in Interpol’s list of stolen artworks; omission to do so renders its repatriation a more difficult task,” it said.

The Kanakaria mosaics and other treasures from the church were stolen circa 1976. No news about the mosaics surfaced again until 1988 when it emerged that four of them were in the possession of an American art dealer named Peg Goldberg. Goldberg had secured them the same year for just over $1 million from Aydin Dikmen through a Dutch art dealer. The American art dealer then tried to sell them on, but the Cyprus church learned of the deal and stepped in, requesting that Goldberg return the mosaics. She refused though the church had offered to reimburse her.

A long legal battle ensued and in 1991 the four mosaics were brought back to Cyprus. Thousands of people turned out to greet their arrival at Larnaca airport. The mosaics are housed at the Byzantine museum at the archbishopric in Nicosia.

Dikmen remained on the loose for another six years but in 1997 the German authorities and Interpol managed to find and seize in his Munich apartments 260 icons, frescoes, mosaics and manuscripts from Cyprus. In 2013, after 16 years of litigation 173 ecclesiastical treasures from 50 looted churches were repatriated. Among those were another four fragments of other pieces of Kanakaria mosaics: a medallion depicting St Thomas, the hand of the Virgin, the right hand of the Archangel and a fragment of the decorative band.