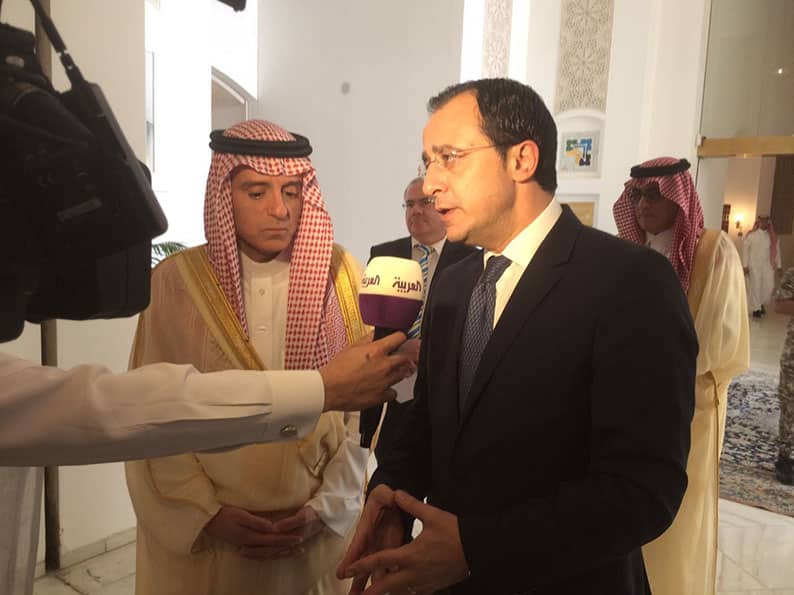 Cyprus is looking to strengthen political and economic ties with Saudi Arabia, in a move not unrelated to the grand chessboard of regional geopolitics, daily Phileleftheros is reporting.

Nicosia’s pivot towards Riyadh brings it into alignment with the pro-western nations in the Middle East, the paper said in an analysis piece following foreign minister Nicos Christodoulides’ visit to Saudi Arabia on Sunday.

According to Phileleftheros, the two agreed to further develop bilateral relations in the proximate future.

To this end, the two governments are poised to sign a number of agreements and undertake joint actions.

Also discussed was the prospect of opening up a Saudi diplomatic mission in Cyprus in the near future – a move aimed to cement and facilitate the growing relations.

Christodoulides noted that Cyprus, as a member of the European Union, is in a position to play a significant role in strengthening ties between Middle Eastern nations and the EU.

During President Nicos Anastasiades’ visit to Riyadh in January this year, the two nations signed a double taxation avoidance agreement, a cooperation agreement on civil defence matters, and a Memorandum of Understanding.

Elaborating, Phileleftheros said Nicosia was in this way positioning itself with one of the two ‘camps’ in the turbulent region.

Cyprus appeared to be joining the Saudi-US-Israel ‘axis’, as opposed to the Turkey-Qatar bloc, it said.

“Nicosia is playing its cards right and is scoring points in the Arabian peninsula. At this moment, it is aligned with a number of countries,” the paper said.

The item, which went on to mistakenly describe Iran – Saudi Arabia’s adversary – as belonging to the “Arab world”, further stated that Iran and Qatar have been accused of funding terrorist groups, with Turkey facing similar allegations.

The article made no mention of Saudi ties to the Islamic State.

Saudi Arabia, Qatar and Turkey have backed different terrorist factions in the ongoing conflict in Syria.

WikiLeaks revealed a 2014 email where then-outgoing US Secretary of State Hillary Clinton and John Podesta, then advisor to President Barack Obama, discussed how Gulf states Saudi Arabia and Qatar, “are providing clandestine financial and logistic support to ISIL [Islamic State, IS, Isis] and other radical Sunni groups.”

And a senior Israeli military office has stated to the Jerusalem Post that his country has provided medical treatment to thousands of ‘rebels’ fighting in Syria.

In June 2017, the UK Home Office admitted that an investigation commissioned by former Prime Minister David Cameron into the revenue streams behind jihadist groups operating in Britain might never be published.

The inquiry was thought to focus on British ally Saudi Arabia, which has repeatedly been highlighted as a funding source for Islamist extremists, and may prove politically and legally sensitive, the Guardian reported at the time.

Cypriots make the Sunday Times Rich List for another year